Good morning. It's crisp, cool and dark outside right now. My computer clock reads 5:48 a.m. My mind and body are so used to getting up early I think I'm stuck this way now. I tried to sleep in over the holidays and the best I got to was 8:00 a.m., that's late for me! Vanessa, who I'll be mentioning a lot in this post, since she was my dinner companion recently, slept in until 10 a.m. on Saturday. I was so impressed with that, mainly as to how she pulled it off with a seven year old lurking around. She slept in because she got home late and drank a good amount of wine the night before. I wouldn't really call it "late" per se, we were home by 12:30 a.m. That would have been just getting the night started for us back in the day. She and I somehow survived eleven years of the deep, dark, dirty depths of New York City nightlife...and then we became moms, thank goodness, it saved us!

We were back on those same streets Friday night and this time on our way into Nat's On Bank, a freshly opened restaurant in the village, or as the tourists call it: "Greenwich Village." Nat's is a must add to your list of restaurants to try. Natalie Freihon is the owner and Jonah Eagan (Soho House) the chef. "Nat" owned (owns?) the temporary closed Fat Radish  on one of the lost streets in the LES. Those who remember Fat Radish, know how good the food was and the super cozy, funky atmosphere. I wouldn't use the words "cozy" or "funky" to describe Nat's however, I would say it's "villagy." You know that village vibe, a mix between upscale, rustic and laid back, with menu prices that'll knock your socks off. The inside decor has warm yellow lighting, high ceilings, low banquettes, random vintage pieces, collage art by Isabel Borstein adoring the walls and a minimal number of tables, hence difficulty getting reservations. There's a whole camp set up for outside seating too. 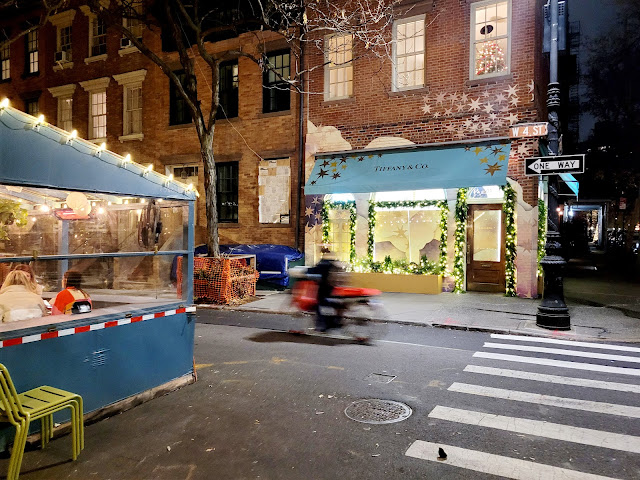 The outside seating was probably amazing in the summer, but it was near empty last Friday night. They did have heat lamps out there, but with a bustling restaurant inside, it's where everyone wanted to be, us included. The outside motif is very impressive as it sits on the corner of West 4th and Bank, with big bright bulbs. It's literally "on the corner" -- the door is shaped as one -- with the east side on West 4th and the south on Bank. This whole area is tricky to get to if you're not familiar with the city, even I had trouble and I know the city inside and out. There are always people walking around the village lost and not knowing where to go, as there are many nooks and crannies and odd little streets google maps can't even make sense of. 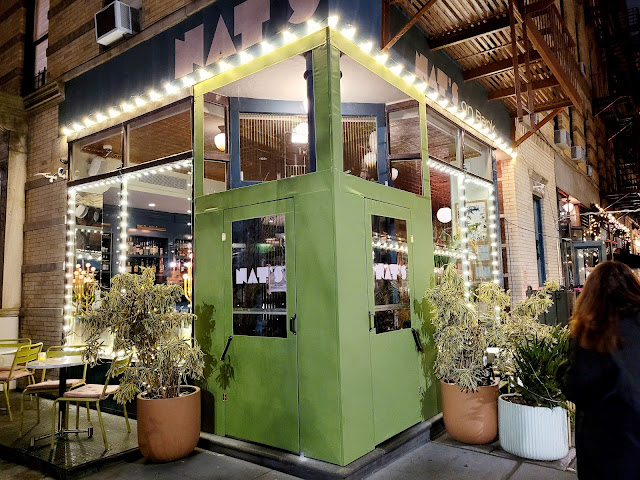 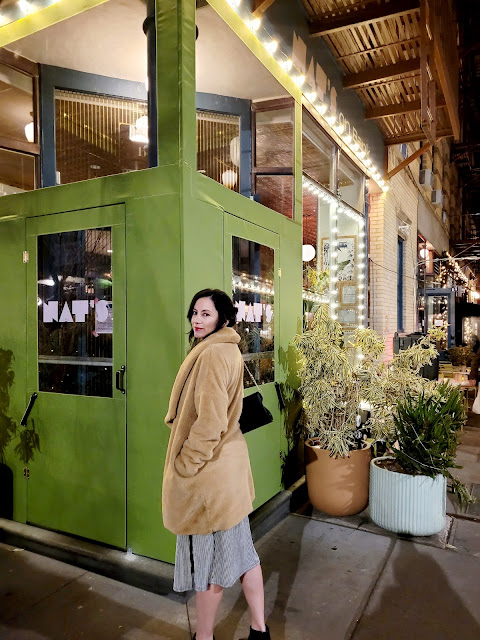 As you walk in you're greeted by a large bar with cocktail shakers shaking, rumbling conversation and good music, When Dove's Cry by Prince was playing at the perfect volume when I came in. I was on the late side - long story, train / subway stuff bla bla - and Vanessa was already seated. She and I were both surprised they seated her without both of us there, that takes the pretentiousness out of it, as a lot of restaurants love to tell you this when you arrive. We scored a prime table smack in the middle of it all. I marked our table with a giant yellow arrow in the picture below. As Vanessa arrived first, she took "the view" table. I didn't mind, as we were celebrating her belated birthday. While I had my back to all the action in the restaurant, I had a view looking out the window onto the street and it was well lit up. 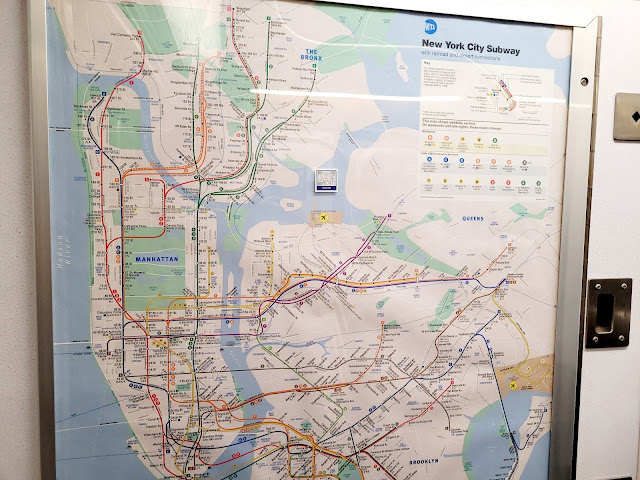 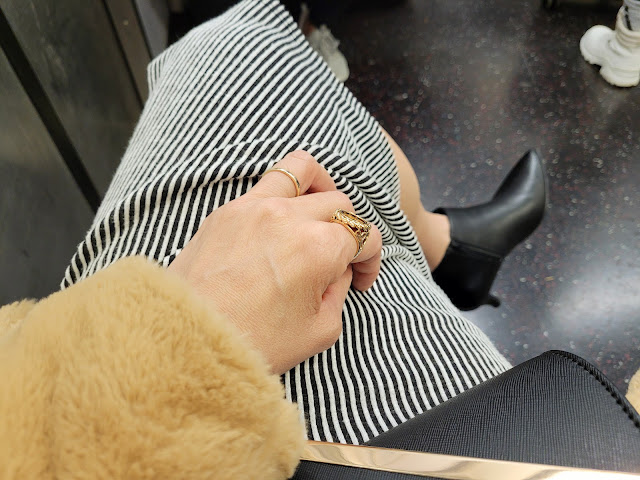 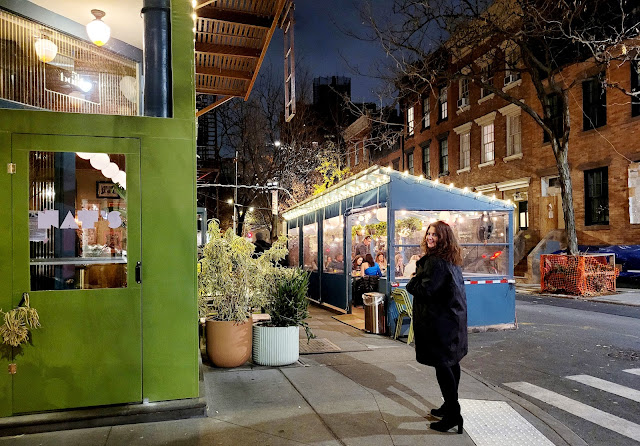 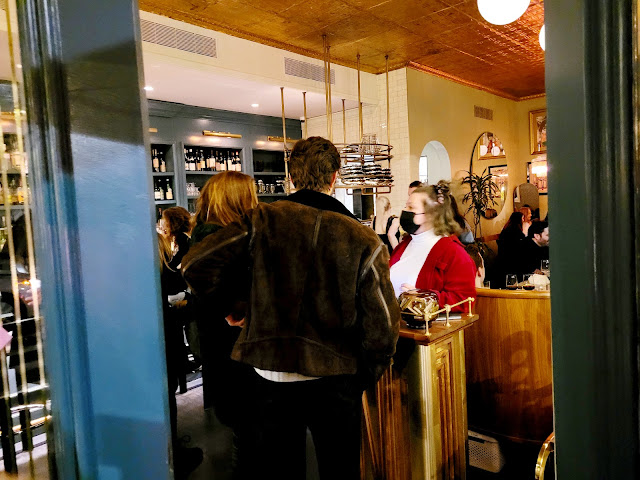 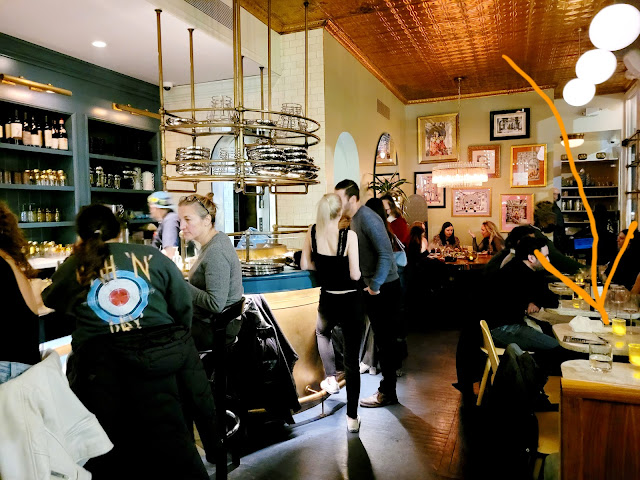 The menu is full of seafood, my favorite. After looking at the menu on their website, we were offered lunch items that night for some reason, so heads up if you're the type who checks the website menu ahead of time and makes your choices that way. I was down for anything on the menu except for the fried fish. We opted for the scallop appetizer and for entrees the prawn frites and uni bucatini. When Vanessa and I dine out, we share everything. I don't mind sharing with her because she's respectful to ensure we each get our equal amounts. There's nothing worse than dining with someone who wants to share everything and then they inhale it all. She and I are careful to take only half of everything and even move food aside for the other. Sometimes when the food is so good, I want to eat her portions too, but of course I restrain myself and let her know "that's yours" and she does the same for me.

So after all that decision making, the waitress told us the prawn frites were 86'ed. Not good. This was the beginning of the night, how could they have run out already? I don't think that was the case, there was something fishy happening there, pun intended. The waitress said we could have the steak, the fried fish or the scallops. We didn't want the steak -- I mean we did since it's crazy good -- but we're both trying not to eat meat, as it's hard to digest and not very good for you, we definitely didn't want the fried fish because it's fried and we didn't want the scallops because we already ordered that for our appetizer. When we explained this the waitress she seemed annoyed with us. We had already made our choice and she knocked it down, so telling us "I don't know what else to tell you" with a side of eye roll wasn't too cool. How about, "I'm really sorry that we're out of it, I know that's what you all really wanted." We went for the steak. 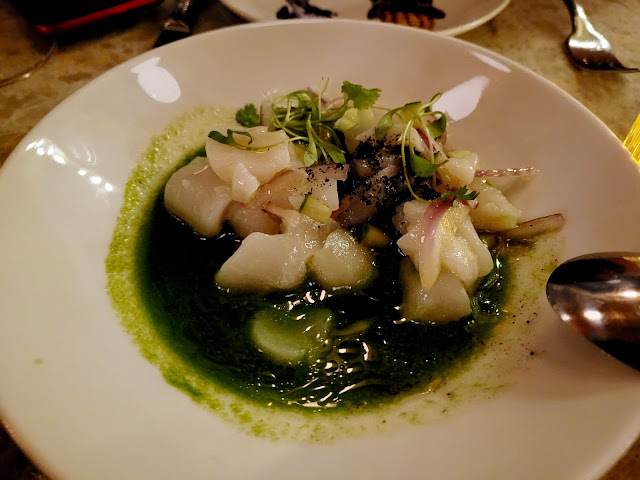 Now we were talking, these flavors mixed together we had never had before and we were both transported out of our seats into the sky onto a big, fluffy cloud, SO GOOD. You know a restaurant will have the staying power when you leave and days after you begin to crave it again. I can't wait to go back actually, that's how good it was. I would even consider going this weekend but that may be too soon, I need to chill. The leekes and butter combo added an interested twist with lemon I would never have thought possible. This is top notch creative cooking at its finest or "elevated New York classics with a touch  of whismy," as described by the chef. 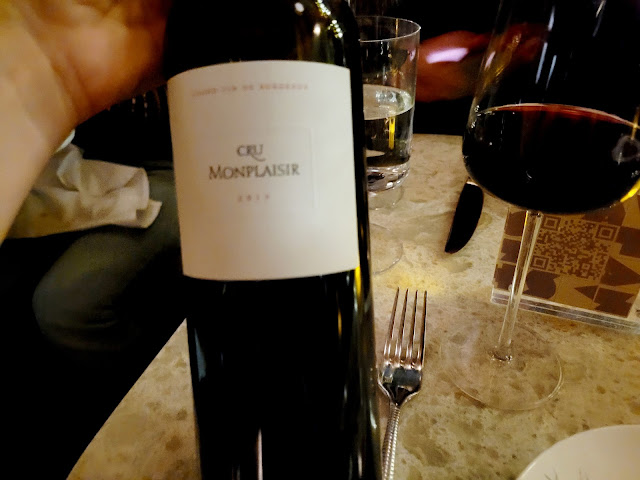 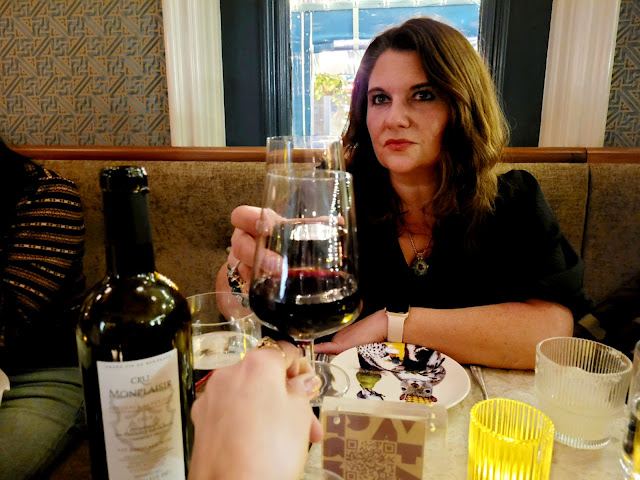 Vanessa chose the wine, which I was fine with, as I completely trust her choices, we're winos and she knows her shit. I was happy with the Bordeaux choice, as I went through my Bordeaux phase and am always happy to give it another round. The wine was excellent and neither of us got a headache from it the next day. Evidently it was organic too, which helps the cause. Of course it does, as there are no pesticides being sprayed on the grape vines during harvest, to kill the bugs. 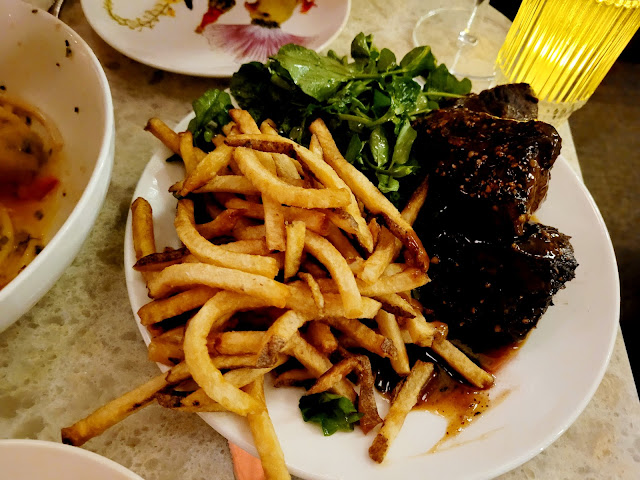 I hadn't had a steak in about three months, so I was ready for it. The thick, tasty, dark au poivre sauce draped all over the perfectly cooked steak with big chucks of peppercorns melted in our mouths. I can taste it now as I type this. When food is this good, I want to go savage and eat it so fast. Thank goddess Vanessa and I had a lot of catching up to do, so we were forced to slow down and enjoy every bite. The skinny fries were perfectly crispy and dipped into the au poivre was ridiculous. The watercress kind of disappeared in the sauce, but scooped up with the fries and a bit of the meat, again transport straight to the Nat cloud. 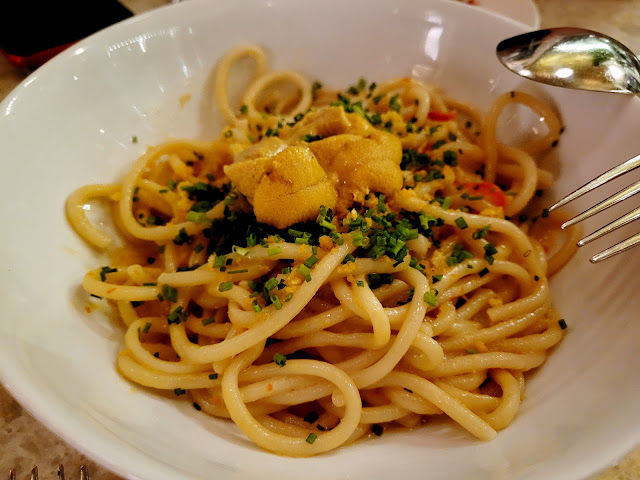 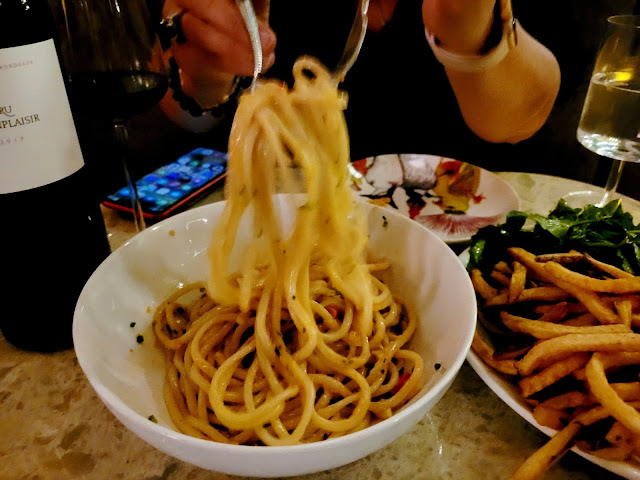 Sea urchin? Pickled chili? Breadcrumbs? Amazing. Everything worked wonders. It was incredible. I'm so blown away by this chef's work. The breadcrumbs gave the creamy sauce a crunchy texture and pickled chilis added some heat to the dish.

We were stuffed turkeys. We ate almost everything. There was steak left and I just couldn't do it and offered my portion to Vanessa and she too said "no way, I'm too full." While the plates look like they are small, this amount of food was more than perfect for the both of us. The waitress came by again and asked if she could take our plates and if we wanted anything for dessert. We passed on dessert as we had just under a half bottle of wine to relax with. About two minutes later the waitress came back and plopped the bill down on our table. Rush, rush, we had barely finished chewing our food. When I waited tables back in the day and I did so for about five years, I always asked if I could bring the bill: "Would you like the bill?" I would never just drop it like that, unless the table was sitting all night, which we weren't.

Our waitress was definitely attentive and on top of her tables, we did feel rushed and it made us feel uncomfortable at the end though. As we finished up, Vanessa put her card down and went to the restroom. During that time the waitress came by, grabbed it, ran it and brought it back to the table without me even knowing. When I looked at the bill and Vanessa's card I took out my card to add both for the waitress to run. That's when I realized she had already ran Vanessa's card! Way too fast. I waived her down and let her know we were splitting the bill and she said she could fix it and she did. Vanessa ended up seeing the whole charge on her card the next day and wasn't too happy. I explained the situation and the charge did eventually fall off. Other than the waitress' couple of faux pas and the 86 on the prawn frites, we had a great time. We will definitely go back. I had planned to treat V, but she insisted I not and that I take care of the after dinner instead.

To continue celebrating, we walked around the neighborhood to find somewhere to go for our night cap and her birthday dessert and singing, that she didn't know I was planning. It was a nice little walk, as there were lights lit up everywhere for the holidays. 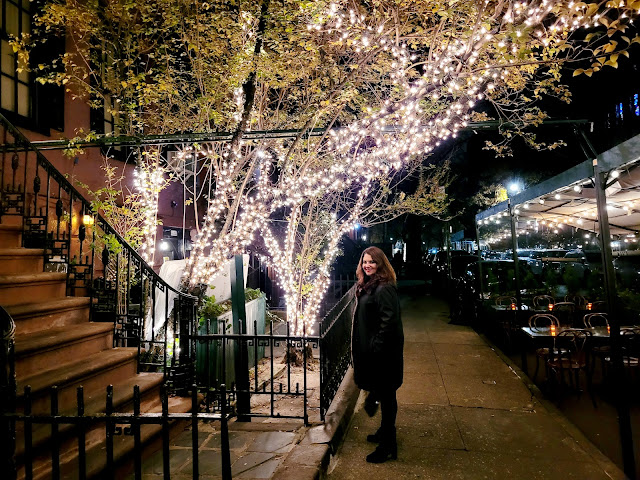 We didn't have to walk far, about two or three blocks and we stumbled upon a new place simply named, Wine Bar, in a red neon sign. The manager said they just opened and we were so happy, mainly because we didn't have walk around in the cold anymore and because it's exactly what we hoped we would find. We hit the jackpot. They did have dessert but the manager said he didn't have any candles and offered a birthday champagne toast, but no singing he said, they're too cool to sing I guess, so I had to sing by myself when it came. I don't even like champagne, but Vanessa does, so I gave her mine, it all worked out. 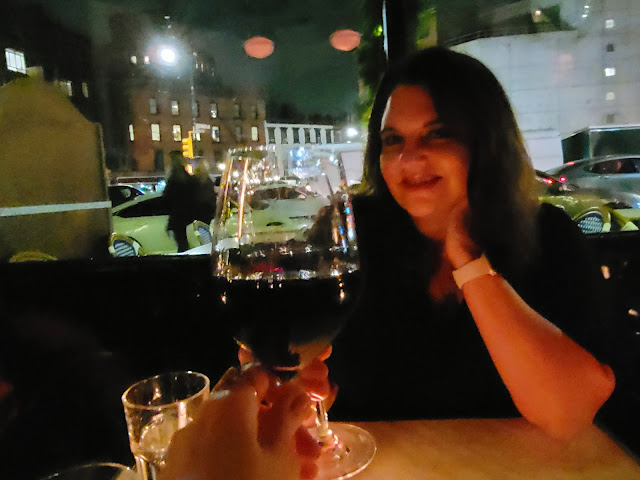