I love discovering amazing restaurants in neighborhoods off the beaten path. Case in point: Ponty Bistro. Located in Harlem on 139th and Adam Clayton Powell Blvd, this restaurant blew my mind with its tasty food. It was my friend Maria's birthday and she lives in Harlem, so I wanted to choose a place in her neighborhood and Harlem is super close to me too. She and I have been to dinner many times together in Harlem, so I wanted to find a place she (and I) have never been to and still something we would fall in love with. I did my research, looked high and low and "found" Ponty Bistro. It's always fun for New Yorkers to "find" (mine all mine!) new places, mainly because there are soooooooooo many restaurants, to find one that's a gem is special. Ponty Bistro was just that.

First off it's all about the food. I wouldn't go on and on about this place if the food wasn't incredible. We had a 7:30 p.m. reservation and Maria got there around that time and I was stuck on the subway, so I didn't arrive until 8. I called the restaurant when I saw I was running late and they nicely changed my rez to 8 p.m., with no attitude, making me right on time. Maria is never exactly right on time, so I knew it would be fine with her. Ha, yes a baby dig. By the way, google is ridiculous now, they made the reservation for me. Exactly how they did it? I have no idea. All I know is I got a notification from them saying "we'll call the restaurant to make your reservation." I continued to lounge out and thought, "ok then, that'll save me a call." Not long after that, I got another notice saying, "your reservation is confirmed." I wasn't sure to believe it and I had wanted to call the restaurant to double check, but I never got around to it and low and behold the rez was there, it worked! I'm impressed. 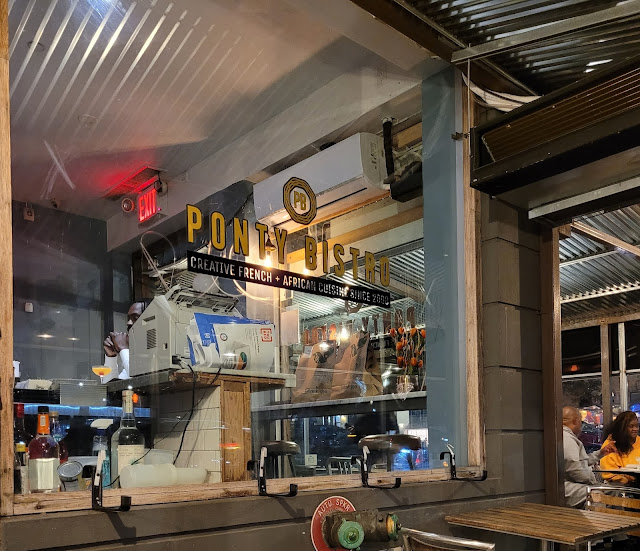 The menu is what looked super intriguing when I saw it online and it gave us the same excitement when we saw it in person: 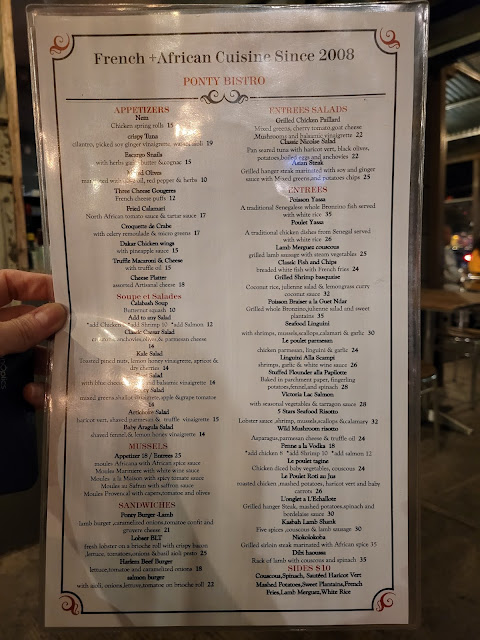 It took us FOREVER to decide, as you can see there are a lot of interesting and unique dishes to choose from, as the cuisine is French / South African / Mediterranean, what an amazing combo for food! We started with drinks and I went for my typical glass of red wine, I'm in to Cotes Du Rhone these days, as my friend Vanessa has successfully influenced me on it. I'm not into cocktails much anymore, it got a little old. Maria is a champagne lady all the way and that's exactly what she got. I'm not into champagne anymore either, it's too acidic on my stomach. Wow, I really sound like Debbie Downer here, sorry. I worked for Moet&Chandon and Veuve Clicquot, so again, toooooooo much of it, yuck, I can't even bare the thought of it. Some people in the industry go the opposite way, they don't get sick of it and instead they go ALL in... not good, as this can turn you into a major alcoholic. It only turned me into a minor one. 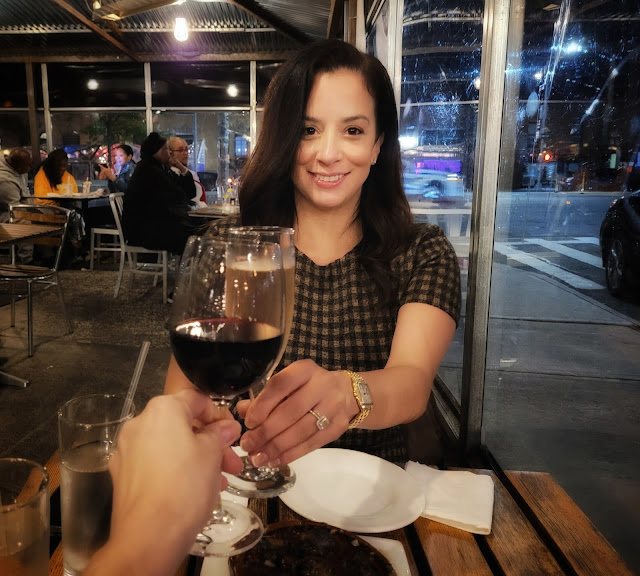 I could talk drinks all day if you wanted, I've run the gauntlet on that one, both personally and professionally. I'm down to just red now, simple. Food is where it's at. After much deliberating, we finally made our choices. We started off with escargo and for entrees we went with the Stuffed Flounder Alla Papilotte for me and the Grilled Shrimp Basquaise for Maria. 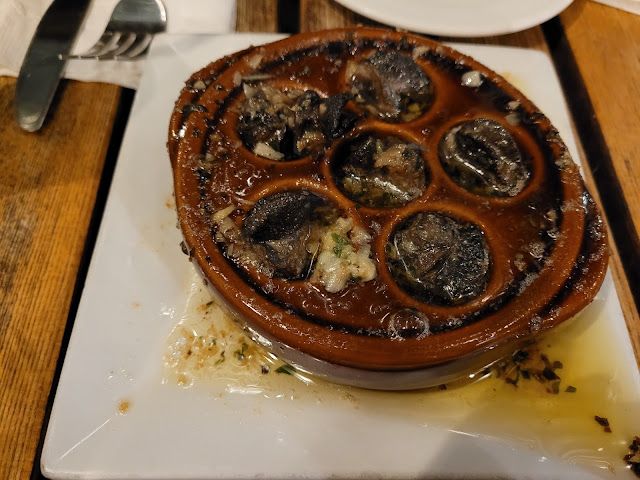 Reasonably priced, I'm okay with this amount. This dish was also out of this world good. Extremely flavorful and we dipped our bread in the sauce, aaahhh, sooo good, I can taste it now. So glad we got this. I haven't had escargo in a long time. Not that it's a dish I always order, in fact I've probably only had it a handful of times in my life. A winner from this menu though. 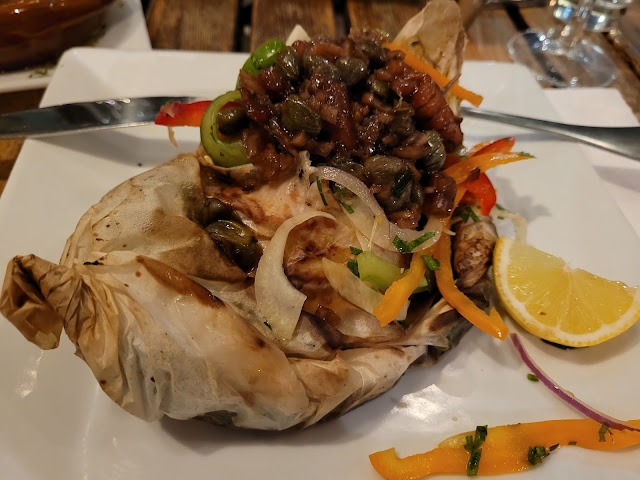 Look, it's New York and I hate that we resort to saying that when we over pay for things. It seems the prices on food continues to go up and up and up, is it just me? I know there's major supply chain issues right now, but this has been happening since forever.  Anywaaaaay...what the menu doesn't say about my dish choice is that it's stuffed with crab meat! I don't why they would leave that out that incredible detail. Crab meat is one of my favorite things to eat in this world. There were also thinly cut slices of green peppers, yellow peppers, onions in what tasted like a light vinagrette type of dressing and capers, olives and lemon. Really, really good. Maria said she was surprised I didn't lick the plate. 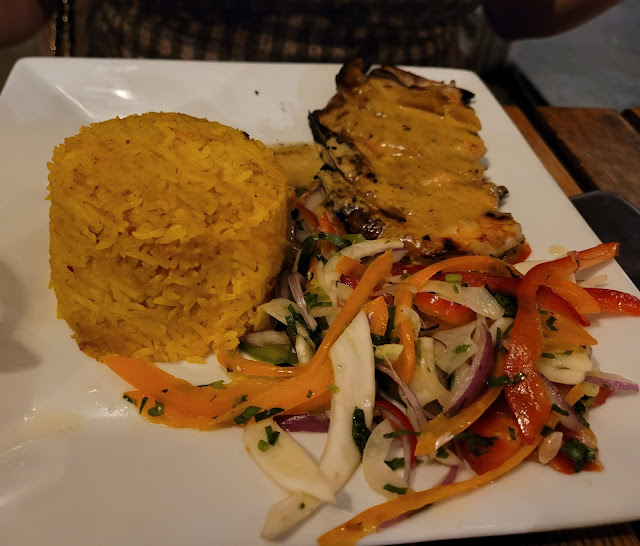 Not sure what the big price on this is, as it looks relatively inexpensive to make? Because I was too busy stuffing my face with my entree, I never ended up trying Maria's dish. She was very happy with it and said it was very good however. She's the @foodiebrat, literally, that's her handle, so she's super picky about food, a total brat! Therefore, she's not one to say something was good if it wasn't. 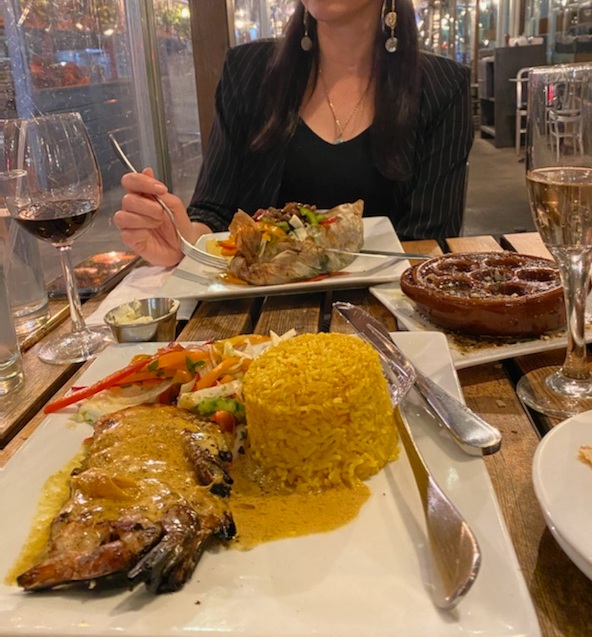 Since it was Maria's birthday, I asked the staff to surprise her with dessert, singing and a candle. They messed it all up though. Obviously everyone knows dessert with singing and a candle come after the meal right? Maria was in the middle of her shrimp with lemongrass curry coconut sauce and here they came, with the dessert, candle lit and singing. They definitely surprised her...and me. We had to scramble to make room on our table for the dessert, in the sea of plates. I've never known curry to go with with creme brulee. To top it all off, the creme brulee was dry as a bone. 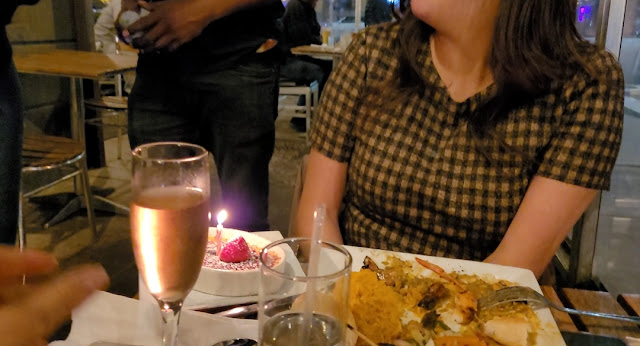 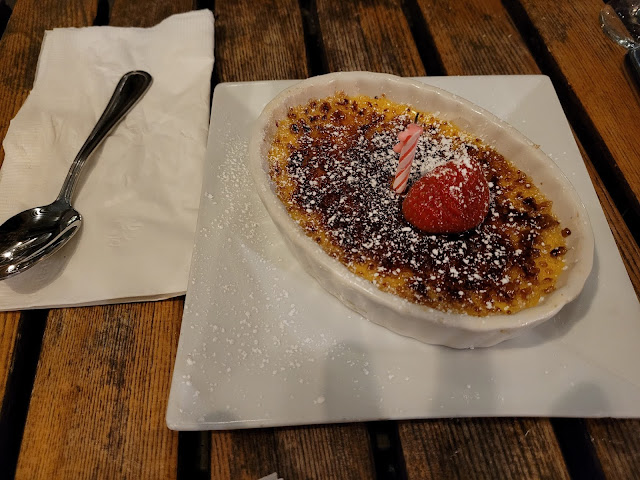 Other than the dessert hick-up, everything else was great. The atmosphere was upscale, nice lighting and not too stuffy. When you're uptown, there's no pretentiousness, they just are who they are, cool. Not like downtown, where everyone tries so fn hard. Not saying I don't like downtown, it just is what it is, everyone knows New York is crazy pretentious. The crowd was a nice mix and everyone was dressed really well, I do remember noticing that.

After dinner, we looked up "cocktail bar" in google. I mean you can really do everything in google now-a-days. Sure enough, it found us the most delightful, upscale mixology lounge, 67 Orange. Maria and I both come from a cocktailing background, so to find this place was a treat, as neither one of us had been there before. Still in Harlem fyi. Amazing little place, the bar seemed elevated, making the mixologists seem as though they were on stage (this observation could very well have been my e-hitter talking though). We didn't take any pictures because we forgot to, we were too busy living life.