New restaurants in New York are always kind of a big deal. There are so many that you could just only dine "new" each week, in the "before" that is. Now, we're just happy having somewhere -- anywhere, to go. To our delight, George Mendes, formerly of Michelin-stared Aldea, seem to time everything just right and opened Veranda this past April, in SoHo to boot. Veranda is described as "recognizably American cuisine, with nods to India, Mexico, South America, the Middle East" and the chef/owner's home culture, Portugal. The first couple of months opening were probably mostly empty tables, but as the weather warmed up and more people became vaccinated, I'm sure he started to see the tables filling up and the buzz of a happening New York restaurant scene delighted his ears once again. I know it did mine!

My go out buddy since back in the day, Vanessa, is still as game I to check out restaurant debuts, it's a thrill I don't think will ever go away. We were obsessed and in the early aughts had a newsletter dedicated to it, Fast Metropolis, do I still have any readers from back in the day? :> We evolved to much more than that, but started out as a nightlife newsletter, which we enjoyed, as we would go to new restaurants, bars, clubs and lounges and write about them and had a bit of notoriety because of it. So Vanessa found this new restaurant and booked us reservations, which were not easy to get, but I guess she still has her trickery ways. New York is coming back...with a vengeance!

So jumping right in, we decided on the croquette appetizer, two entrees: a steak and a bass and asparagus for a "green." For cocktails, we kept it simple and went with martinis, she a regular and I the "Ultimate Dirty Martini," which I ordered off the drink menu. This was the best dirty martini I've ever had in my entire life, you could tell a lot of love and passion went into the making of this drink: "olive oil fat washed vodka, carpano dry vermouth, olive brine, celery bitters, cracked green peppercorns & tri-color cirgonola olives." 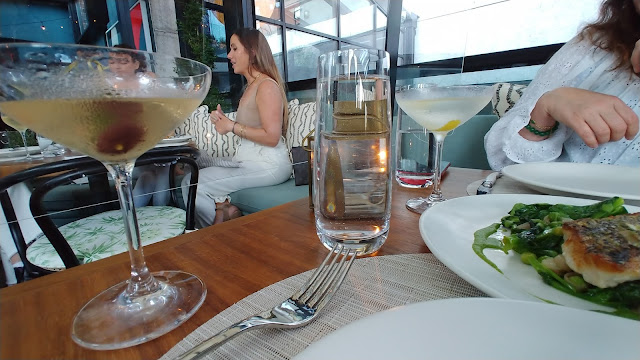 CROQUETTES:  "salt cod, potato, sweet smoked paprika mayo" = $14, pictured below. This pic I took directly from the Veranda website, because I forgot to take a picture of it when it came. Vanessa and I were busy catching up on our lives and enjoying our cocktails and the croquettes were a bit underwhelming when they arrived. This picture makes them look much bigger than they were. They were so small, that they looked like something I would have put inside my barbie dollhouse on the kitchen table when I was little. These should be a "bar bite," not an appetizer. Not a good bang for the buck: 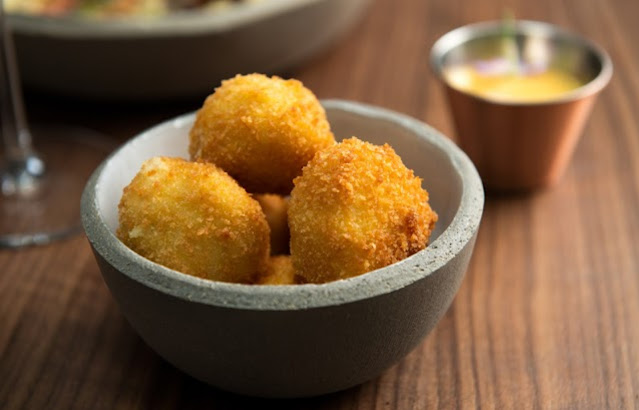 Pictured below is the JUMBO GREEN and WHITE ASPARAGUS, "cooked on the plancha, morels, green almonds, charred pumpkin-seed cilantro salsa," = $16. Delicious! Yum, yum yum, just looking at the picture I remember being very happy when I took the first bite. The cilantro salsa was especially creative and unique and was the perfect addition to this green medley. Asparagus can get boring, this dish was anything but that: 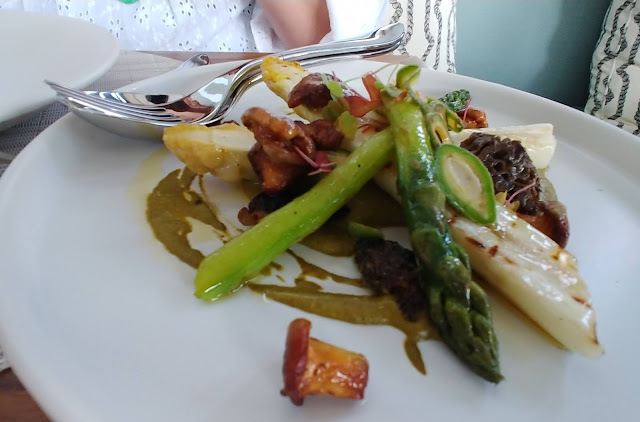 BLACK BASS, "pea leaves, sweet peas, Catskill Mt ramps, preserved lemon," = $39. "Ramps" are wild leeks and they worked beautifully with this bass. The fish was cooked perfectly, the presentation was very nice, as you can see and all the flavors blended together so well that we devoured this plate so fast. There was a lot going on at dinner, between she and I not being able to stop talking, eating, drinking, the night was flying by so fast, you know how this can go. It was so much fun, especially since we're crawling out of quarantine, it made this dinner extra special:

DRY AGED NY STRIP STEAK, "harissa, coriander and cumin glazed eggplants, baby potatoes, mint, dill," = $49. Overpriced right off the bat. Both entrees were pricey, in New York everything is ridiculous expensive and you're always getting ripped off, sadly we're kind of used to it, doesn't mean it's right though. As you can see from the picture below, the presentation isn't the best and not what we were expecting. The menu said it was a dry aged steak, so we thought it would be a steak with accompaniments on the side, not everything jumbled together. I don't know what happened there, by the time it arrived we were buzzed and busy talking so just rolled with it. Overall it was good, it wasn't mind-blowing, as it should have been given the price. 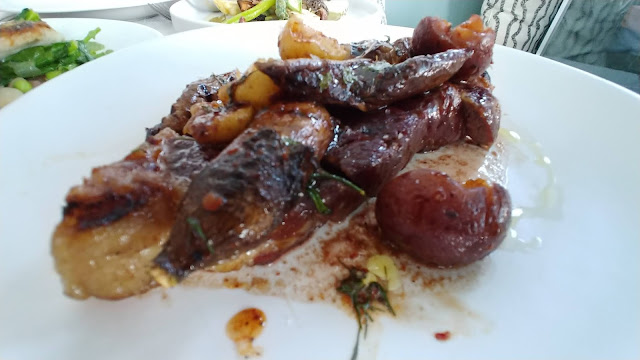 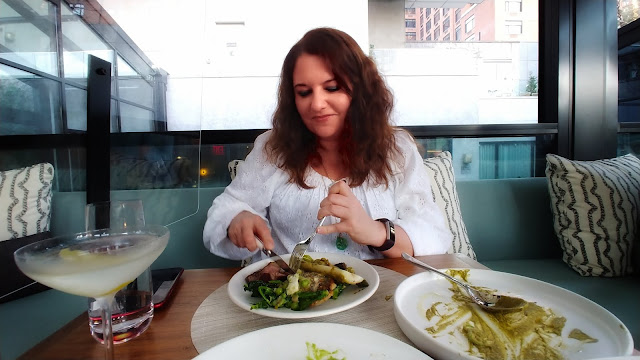 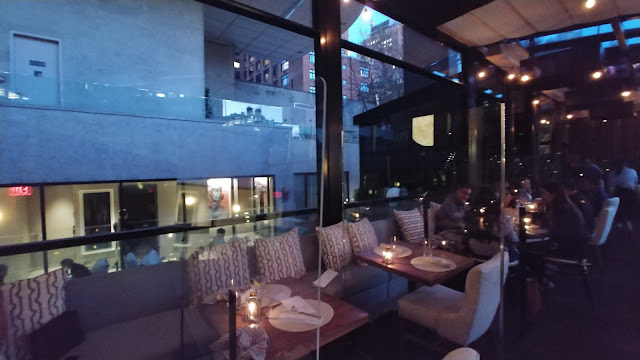 All the tables were filled and patrons were waiting at the bar, without masks! It seems radical to see that. All the staff were wearing masks, I guess they still have to. It felt kind of strange to be without the mask, but Vanessa and I are fully vaccinated, so we were happy not to wear them! The table above with the napkins on it was ours, I took this picture as we were leaving. I wanted to show how each table is surrounded by these clear walls due to covid. It made our table extra special to be blocked off and we had the added bonus of not having to hear the conversation at the tables next to us, there were people there during our meal.
I also have to say the service was excellent. I'm a stickler for service as I used to be in the industry for a long time and I was an excellent server myself, in fact I was the head server and trainer [pats herself on back]. Our server was on top of everything and the hostesses were nice and friendly, not snooty and rude like at some New York restaurants, which is a total turn off. The scene was good and the energy was high, you could feel everyone was happy to finally be out and in good spirits. After dinner we wanted to grab a drink, so we walked around the neighborhood to find something. 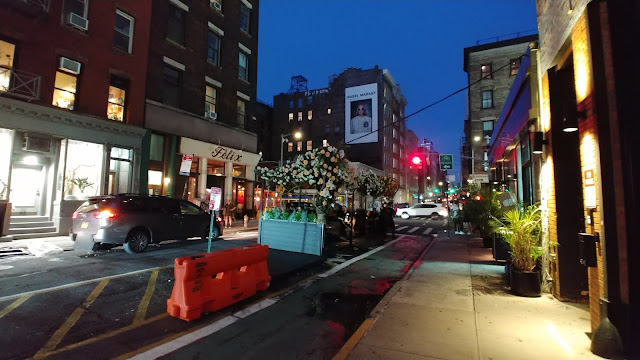 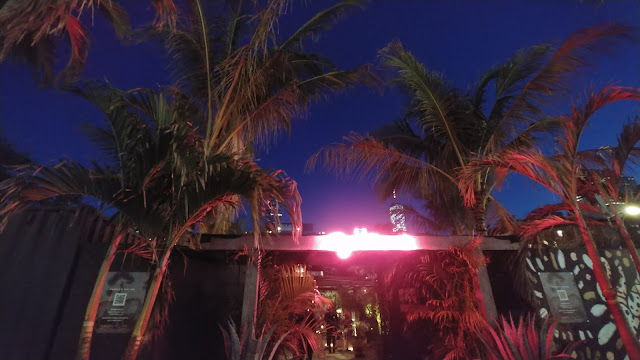 We went to one of our old stomping grounds first, the SoHo Grand Hotel, we felt nostalgic, only they're not seating people in bar area, it's only used for service. There are tables in the entrance however, except they were all taken, there weren't many and they had every other one closed off. So we kept walking. I remember passing a place on the way to Veranda from the subway that looked like a jungle, off Houston on the South side of Grand. It looked open so I made a mental note. I suggested we head there and glad I did. It looked like a pop up, but it's a restaurant called Gitano "the garden of love." Clearly it was created for covid, as it's an all outside space with a large tent, makeshift walls and curtains to block any rain. As it's technically outside, you're allowed to sit at the bar. They have another area that looks like Nikki Beach in the back, but was closed due to social distancing. We decided to have a drink here to end the night and enjoy the strangeness of being surrounded by multiple, giant palm trees in the middle of New York City.