Happy Friday or wine day as it's known around here! It's still dark here in New York and it's 5:39 a.m. I thought with the time change the morning would now be light? It doesn't seem to be the case. It doesn't get light here until 7:00 a.m., same as before!? I don't know what happened there, but I vaguely remember the same thing happening last year. For those of you weirdos who are also up at this ridiculous hour, you may have noticed this? So why do we change the clocks if it isn't making much of a difference? Us weirdos do have many advantages from being up this early though, one of them being a witness to the rotation of the earth at the precise moment it turns and faces our nearest star. It's nothing other than magical if you ask me. Just the pure, long mental visual alone of these two celestial bodies greeting each other in the universe is enough to warm even the coldest of hearts.

The holidays are back again! Christmas and New Year's in the next two weeks, what? This year everything feels a little flat. While there is a tingle in the air for the holidays, it's just another day at home. Normally I would be traveling to Florida or Toronto to visit family, but not this year. This year we're home bound, because we don't want to get covid nor do we want to spread it if we have it. Besides, our town is on a stay at home order by Governor Cuomo and in fact he just closed all indoor dining at NY restaurants. I wasn't dining indoor anyway, that was too risky, I was only dining outside and that even freaked me a little. The outside tables were way less than six feet apart from what I saw and some had giant tents with massive covers that put you back "inside" basically. I feel bad for the restaurant industry, it's close and dear to my heart, they're getting hit very hard. Some are doing well though, as I know I for one order the heck out of take out.

To those of you wearing your masks when you go out, I just want to say THANK YOU, on behalf of myself and the entire world. Thank you for caring for my well-being, the well-being of my family and that of your community. You probably don't get a thank you often but you should, as it's not easy wearing a mask, in fact it sucks, but you do it because you're not a selfish person. Thank you for believing scientists over Donald Trump. Also, thank you for social distancing and not spending time with your families this year because you don't want to spread it to them or get it yourselves and spread it to the public. It's hard to do all of these things, especially being away from family. You're a good person and a good member of our society, thank you for doing what's right.

While it's showing that people who get covid may not show any symptoms, another amazing thing that seems to be the case! There are others who get their leg amputated, sent to the ICU and put on ventilators and as of today 35,425 people have DIED from it in New York alone. In the United States total, 304,000 people are dead due to Covid, since March. It's like Russian roulette, if you get it you don't know if you're going to be one of the lucky ones or if you're onto your last days on earth. On average, 931 Americans are dying a day from covid. That's like two jumbo jets dropping out of the sky every single day and killing everyone. Remember 9/11? In one day 2,996 people died. With covid, we'll hit that number in three days. These are not "scare tactics," these are facts. We want facts and we don't want government blowing smoke up our ass, we can handle the truth. People who don't wear masks and ignore the C.D.C. guidelines must just not care about the people who are dying. So again, thank you to those who are following the protocals, you're doing the right thing.

The electoral college met and solidified Biden's win! The most powerful Republican, Mitch McConnell congratulated Biden, as has Putin of all people! When Trump won, 81 million people accepted it, like the mature grown ups we are. Sure, we hated it and called fraud in our minds, but no one went off the rails as Trump is doing now. Maybe someone should call the psych ward, I'm not trying to be mean, I'm being for real. If he tries to stay in the White House after Biden is sworn in, I would imagine that would be the only option!? There's been zero voter fraud, as has been proven in his lost law suits. He lost on election day and continues with losses everyday with this nonsense. He's still asking his base for donations to "fight" for his "win." His followers give and just believe anything he says, as they do in cults. Maybe he's doing this because he cheated and didn't get caught? He can't say, "there's widespread fraud because I did it and no one caught it!" It would make a good case though! Biden didn't cheat, because he's not a cheat, he won because we voted him in and Trump OUT.

We get to end the year on a positive note, at least! Biden is the President-elect and there's vaccines for covid, more reasons to make the best of this quieter holiday season. My young man is handling everything pretty well, he understands why we won't be spending it with our extended families this year. This Christmas marks another "first" in his list of firsts, it's the first Christmas he doesn't believe in Santa. He's eleven going on twelve in February. I didn't tell him! He actually told me. Me: "Have you made your Christmas list for Santa this year?" Boy: "Santa?" Wait, did he just question Santa? I was shocked. "YES, Santa, why?" Ugh, we were going to have the conversation and I didn't want to be the one to break his heart, I wanted his pop to have to do that. Boy: "Santa though? Aren't you Santa?" Me: "What do you mean?" Boy: "No it's okay, yeah Santa." He knew, wow. "So you know then?" "Yeah." I didn't have to say, there is no Santa and we've been lying to you all these years and going to great lengths to protect our lie. "Okay so you're fine with that? "Yeah of course." He's so much more grown-up and mature than I give him credit for.

This year's presents will still say "from Santa," but the jig is up. Time's are changing around here and that's how life is. My son doesn't believe in Santa anymore and my nephew has graduated college and moving on to higher learning. The whole world has changed, so these individual changes aren't standing out as much as they should. I'm also grateful to be able to have presents, a place to live and an income. 12.6 million people are out of jobs and that's just under 3 million difference from the Great Depression in the early 1930's. It's going to be a bleaker Christmas for a lot of people and dollars will have to be stretched to make it happen. The government is working on a new stimulus package, although the Senate is controlled by Republicans, so I doubt it'll be anything substantial. In Canada, the government has been giving out of work citizens from covid $2000 a month since it started, now that's taking care of your people! Again, thank you to those who are social distancing, wearing masks and not gathering in large groups, you're helping to stop the spread and end the viscous cycle.

Ugh, I'm tired of thinking and stressing about all of these major problems. I can't wait for the Biden / Harris team to take over to let it all go. I fully trust these experienced professionals to make the right decisions. I can move on and think about nice, peaceful things and get deep inside my head and see if there's anything creative left. Something unusual and fun did happen in New York yesterday, a huge snow storm. I was shocked! I thought it would never snow up here again, as it hasn't in years. Global warming hit New York hard. Ten years ago not getting massive snow dumps on a regular basis would have been unheard of up here, now it's part of our new normal. It was nice to get a little old normal for a change. It wasn't the two feet weather outlets predicted, more like just under a foot. Still, snow nonetheless and the little bit of magic we needed right now... 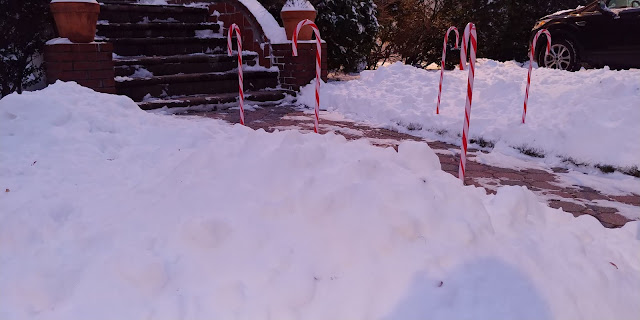 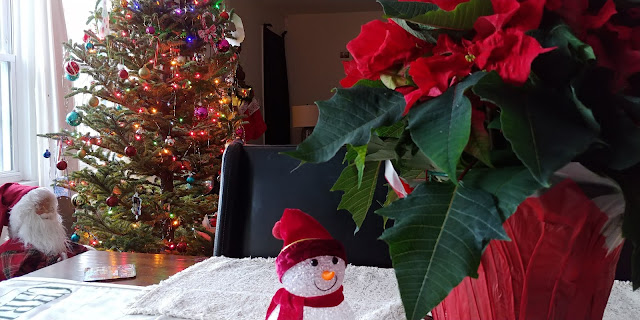 Still with me? I know it was a longer one. Thank you if so and thank you for reading, I'm grateful :O 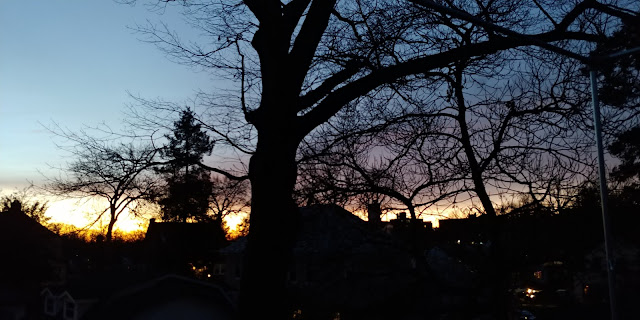 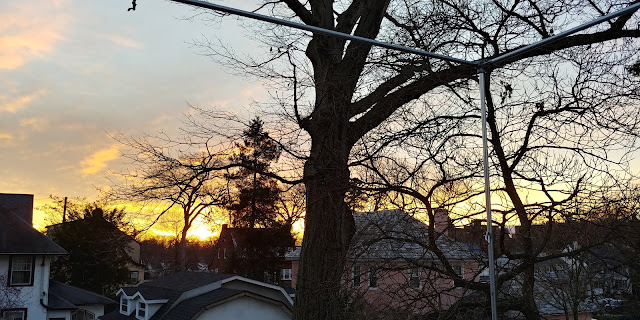 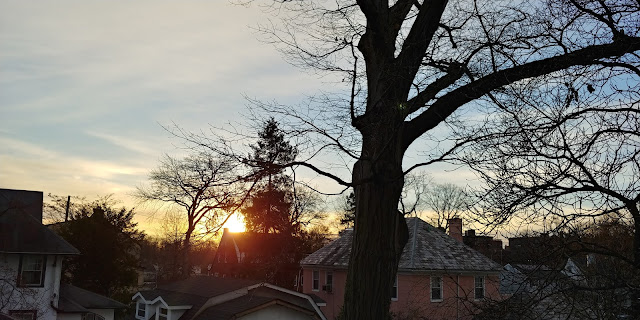 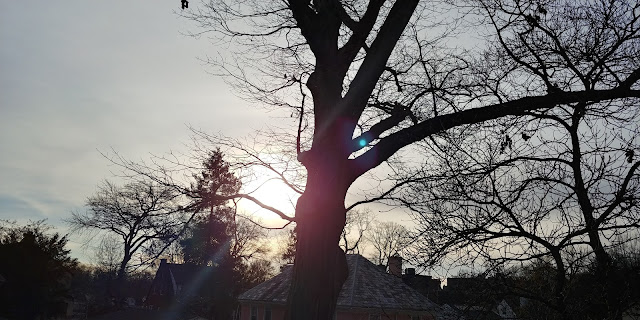 *It's going to be a great day*

Merry Christmas and Happy New Year to you and yours! May 2021 be a better year for all of us!

(Special shout out to my friends Alicia and Aamir, who welcomed their second baby on December 14th :> Doubtful they read my blog, but if so, sending lots of love)