Good morning, Happy Friday! It's as if we've been through a wormhole and are on the other side of reality. We won! Joe Biden is the President Elect! I'm happy we won not for the sake of winning, but for our Democracy and being back in the hands of people who actually care about it and for our personal well-being. I know dear reader, you understand the deep level of concern there was, it showed in how we turned out in record numbers to vote Biden / Harris. It's amazing and pure karma the election hung by the results of the main cities in Pennsylvania and Georgia. In both states, in-person votes (mostly Republican) were counted first, by law put forth by Republican legislators no less, showing Trump in the lead, the mail in votes on the other hand -- which actually came in first (mostly Democrat) -- were counted last, where Biden took the lead for the win.  Dems jumped through hoops to mail their ballots early, as we knew Trump announced his lackey, Louis DeJoy, the head of the postal service and having him "coincidentally" change processes that slowed down the mail. It worked, several postmen confirmed it slowed. I had a personal experience of the slow down, I paid first class to send a card to Seattle and it arrived four days after the date I paid for.

How can anyone not see Trump is as corrupt a tyrant as the day is long? His supporters, they're in a cult......of p e r s o n a l i t y. A cult leader can say or do anything and his/her followers just believe it all, oblivious to evidence, facts and reality. Think DOS, think Charles Mason. I'm happy to report my family accepted the results like normal people, I don't think they were in it, they're just Republican and voted along. I think I even successfully turned one. Another even laughed a little about the whole thing and said, "it's over, he lost, everything will be fine." Maybe there are more Trumpers out there thinking that way. For starters, Biden has been through a lot in his life, he's overcome personal tragedies and during this election has become an inspiration to young people who stutter and of course has an incredible amount of experience to be the President. He's ready to unite Americans and has clearly stated so. He's acknowledged the divide, negativity and anger and wants to clean it all out! (He's gonna need some bleach)

Trump needs to work through his feelings and then......fk outta here! The moment they called Biden as the winner, is a moment we'll remember exactly where we were and what we were doing for the rest of our lives. I remember my moment exactly. The morning started out foggy, I got up around 6:30, made tea and settled into the couch for some relaxation and election news watching. The counts were still going. Newscasters who had been covering the election were starting to look a little on the haggard side. Even though there was no path for Trump at that point, we all let it play out to be fair and still gave him the benefit of the doubt he could win, I know I did at least. I then turned to the NY Times and the Washington Post, I've found they provide more nitty gritty details T.V. news doesn't. I was all up to speed and like everyone else aghast at how Trump announced himself the winner on twitter?! The whole world was watching the peaceful election and there came Trump saying he won before it was over?! Biden on the other hand, urging people to be patient and allow the American people to decide, not him or Trump.

All the news outlets ignored Trump's "acceptance" tweet and went on covering the election, that was still in full swing. How embarrassing for him, the whole thing, to say he won in the middle of the it and then to be ignored. L O S E R. I started to think about getting the day started and the things I wanted to do. A walk was definitely in the cards, I had to rake some leaves, it's full Fall right now and they're coming down hard, which does make for the nicest walks and hikes. I knew I wanted to stay close as Saturday seemed like a good day to call it. After tidying up a bit, I went outside and got to work. There was an abundance of leaves waiting for me and I like the exercise. I can use the blower, but it's so loud and obnoxious and besides as I said, I like the exercise and the extra bonus of a sense of accomplishment from raking them into huge, perfect piles. I know, OCD weirdo, what can I say.

I went back inside and checked the news again and they were still counting. I made a mental plan to stop at the store and pick up champagne. While 71 million Americans were preparing to celebrate the return of peace, on the flip side; Trumpers were mad! They were screaming at news reporters that the election was rigged -- even though there was no evidence of that anywhere and election officials confirming so. Trumpers were just repeating what their leader has been telling them for months, it was all part of the plan, put in place back in 2016 no less. He can't even fathom the thought of Biden / Harris being law abiding citizens. I know a lot of Republicans have accepted Biden as President Elect and all the 40 frivolous law suits is just their way of humoring him. All but one have been thrown out of court. He's moving on from that strategy though and his cheating is on another level now. He's pressuring the Canvassing Boards in the swing counties he lost, to flat out not certify Biden as the winner and he's flying legislators from those states to D.C. to do so in person. He's basing his demands on HIS lies of voter fraud. Again, there has been no evidence of voter fraud and this fact has been proven in court via the lawsuits he's filed! We're now straight up watching an authoritarian dictator at work in the United States. He may turn some corners but it's not a viable plan in the end.

As it was looking like the election was going to continue throughout the day, as it had been for the past four days, I decided to go for a walk. I put sneakers on, my wireless headphones, my charged up phone, mask of course and came in to say goodbye to the family in the living room, all who were glued to the T.V. As soon as I started to walk towards the door I heard, "it's called!" "What??" I came running back and it had been called for Biden on CNN. I don't have CNN though, as it's cable news, so I couldn't see it. I do have antannae news however and so flipped to those stations, they hadn't called it. Walk postponed. This was it, the moment of truth. I knew the whole world was synced up in these moments and then there it was, at 11:08 a.m EST, CBS News called it. The family stood up instantly and high fived each other. I walked outside to get some air, I saw my neighbor and together we yelled wooooo and fist pumped in the air. Everyone who was calculating and watching the numbers closely -- and it was very close in some states -- could see Biden chosen as the winner, by We the People! 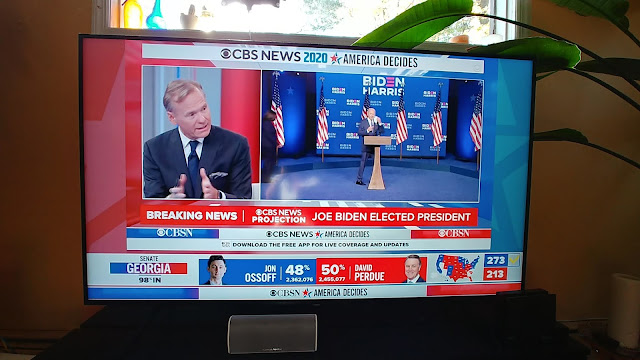 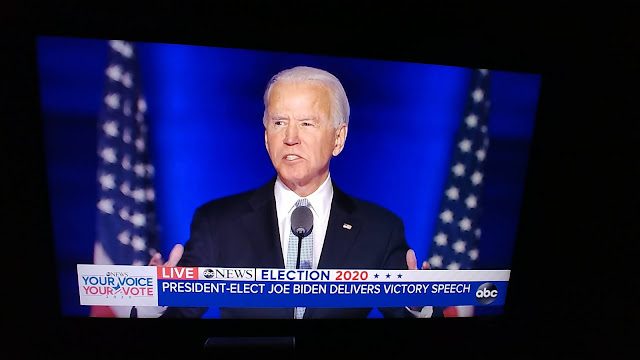 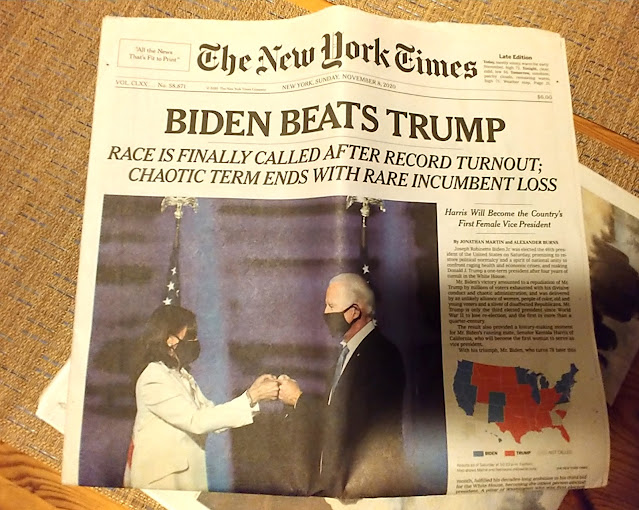 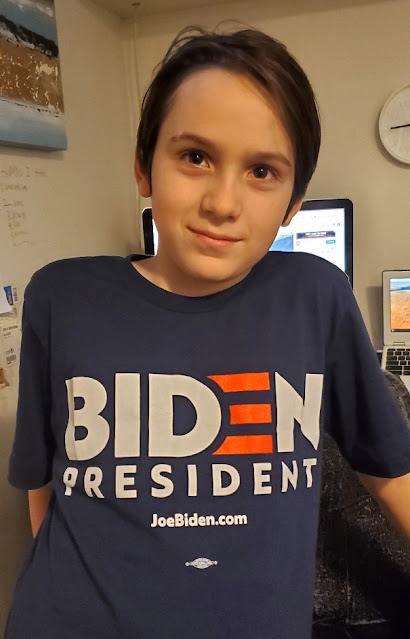 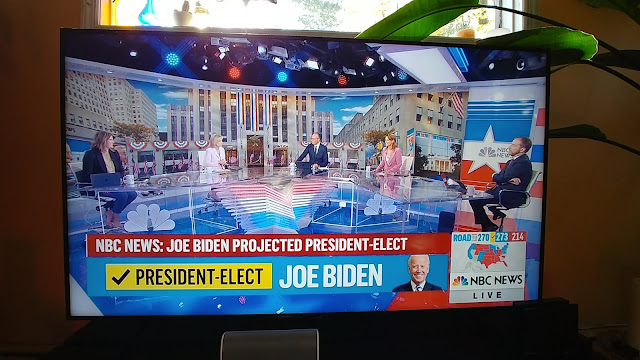 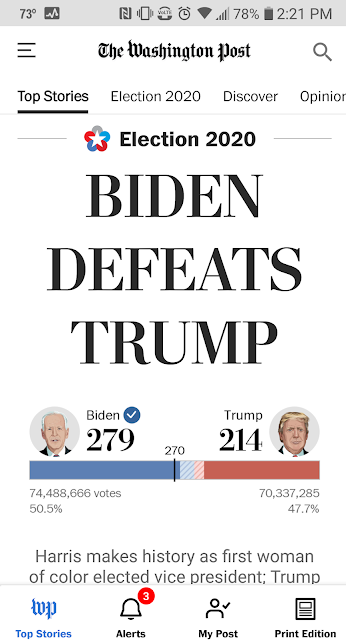 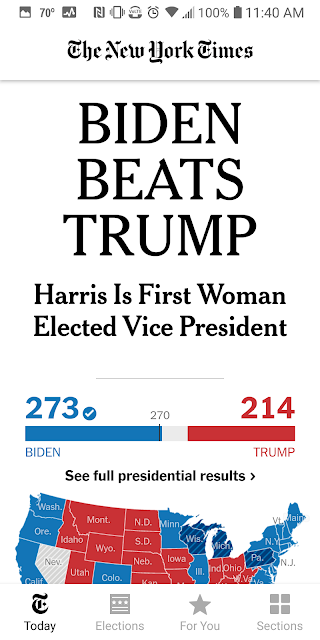 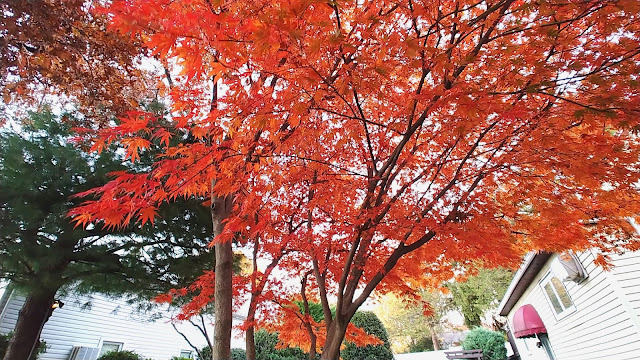 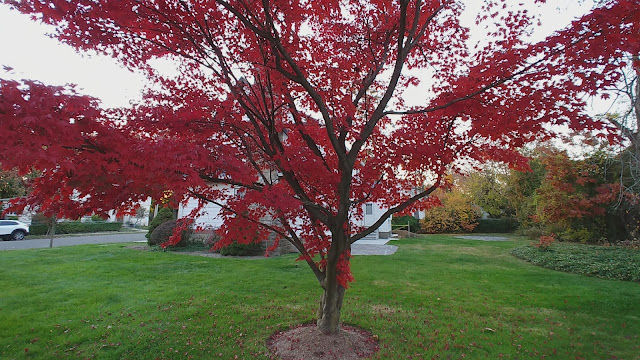 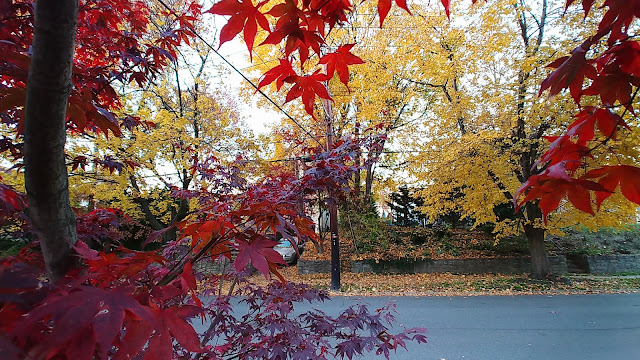