In a weird twist of things, today is a happy day, as of last night I've completed fourteen straight days of quarantine, confirming I don't have coronavirus. As in, going nowhere except for walks. When I do walk, avoiding people. No grocery stores or anything, all online shopping / delivery, requesting drop off at front and wiping down boxes and items in the box when delivered. Too bad we didn't follow South Korea, Hong Kong and Singapore's path of just testing everyone! A concept we all figured would happen, but never did. There are a limited number of tests, Trump and Pence lied (shocker) saying soon they would be "for everyone." The tests we do have, they're only giving you if you've traveled to China or Italy (or if you're a celebrity? wtf is that about?) There are now sadly numerous reports of people dying of the virus after asking for a test and are denied or are denied a test after their partner dies. This isn't happening because health professionals don't want to give it to them, but because they're aren't many to begin with. The same thing will happen with ventilator machines then. Governor Cuomo (NY) says New York state has 3,000 ICU beds and it's estimated we need up to 37,000 and currently there are 700 people in those beds. I mean, do the math, in a nutshell it equates to a lot of death. The Javitz Center - a huge convention center is being turned into a hospital and a Navy ship is apparently coming. In New Rochelle, the National Guard has been there now in its third week, it was the first area on the East coast hit and it hit hard, spreading like wildfire into Manhattan.

As of this morning there are 33,000 cases in New York (7,500 up from yesterday), the most in the whole country, it's shocking to see that number, as I sit here typing smack in the middle of it. New York always ends up the epicenter of any crisis, we can never catch a break, wtf. The second highest is Washington state with 2,500 (200 up from yesterday) and then Florida with 1,400 (500 up from yesterday). Meanwhile Florida's beaches are still open. Are the Spring Breakers still going? The party's over guys! Curtains down already. If you're not as far into the quarantine as I am don't worry, NY is about a two weeks ahead of the rest of the country, as we were one of the first ones hit. It's coming to you though, I'm from the future to tell you what you're in store for. Get yourself a thirty day supply of food and necessities, if you haven't done that already and hunker down. That's the only way you're gonna know if you have it or not - or of course if you get it you'll know. The doctors estimate 80% of people are carrying it and spreading it around if they're not in quarantine. You can have it and not "show" for fourteen days. It feels good after all this time to finally say with confidence, I don't have it, which I couldn't do two or three days ago. Today the game changes, now it's avoid getting it, versus avoid spreading it and getting it. I'm now down to just one misery. So yeah, it's a happy day.

Governor Cuomo (NY) is planning to keep the lock down in effect as long as necessary. At this point he nor anyone in New York is listening to Trump, nor have we ever really, other than for comic relief. No one here, okay maybe a small group in Staten Island from what I understand, are listening to what that clown says. I hope you're not either, this time what he says could actually kill you and your family. Governor Cuomo is taking all the necessary precautions to slow the spread of the virus. If you need some relief from a leader right now, tune into him, he's amazing. It is possible to stop it from spreading, as China and Cuomo efforts in New Rochelle have proven, but that means complete lock down for two weeks from today on. Not even everyone in New York is doing that though to my surprise, so it's going to keep spreading. At the rate we're going, Cuomo gave estimates of living this way to December. I can't even put my head around that. I'm getting a little stir crazy and I'm used to working from home, I've been doing it for more than four years. The not going anywhere part is starting to wear on me a bit. All that is gone for us right now.

If we look at China, which we should, as they were first to report it, they're three months in living this way. Trump is awful to have been calling it the Chinese virus instead of coronavirus. That statement sent his racists into violent acts of racism against the Chinese in the past week, here's the article: Chinese fear life story from New York Times. Racists are horrible people. So in China, they've contained it with their draconian lock down. It's a communist country so if you leave the house, they'll shoot you (I'm exaggerating here), so of course their cases have slowed down. As of late, they're trying to ease back into regular life. The virus in this country is going up and up with no signs of slowing down, well that's not true, as I mentioned above, in New Rochelle it has slowed, because Cuomo was quick to react with the National Guard to contain it.

As far as working from home, some tips I can provide as I've been doing it forever, is to stay on a schedule. Start work at the same time each day, take a lunch and end at the same time, unless you haven't finished working, then do "overtime" until you're done. Look at your place as a really cool office, but still a work place. Once you're off the clock, close all screens down and put away papers on your desk, that will call for you at 8pm if you see them. The main difference between working from home or from an office is there's no commute - and no boring water cooler talk. You have that time back to you, other than that, it's business as usual kids. You'll naturally fall into a routine, especially since you're happy about this new work situation. Having the children at home is another transition. No tips for you there, as I'm still getting used to it myself and we're in our third week of home school. Working the "kinks" out on that one. My boy is rough and tumble and doesn't like to read and wants to play video games all day. I'm lucky if he gets his work done. There's a lot of yelling and ranting and making up and that's how that's going so far. Please, I can't share anymore right now, I don't need my nerves rattled, I'm nice and calm right now.

How are you staying informed to what's happening?  I haven't had regular cable in over two or three years now so I'm using apps as a main source. My main is the New York Times, incidently, they're offering free coverage of coronavirus so you can stay up to speed, normally it's $35 a month, click here: free NYT access to corona updates. I recommend downloading the app and reading it that way, versus from your computer, like some animal. The HuffPost app is always free, which is a great one and The Washington Post is also offering free coverage on corona, click here: free washington post corona coverage. Again, I reco downloading the apps. Here are some screenshots I took, all from NYT, tracking the virus through out the last two weeks: 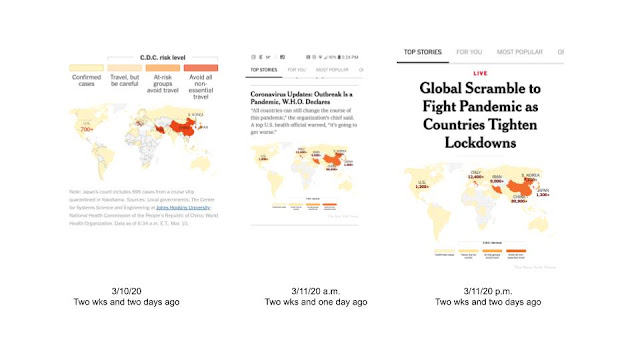 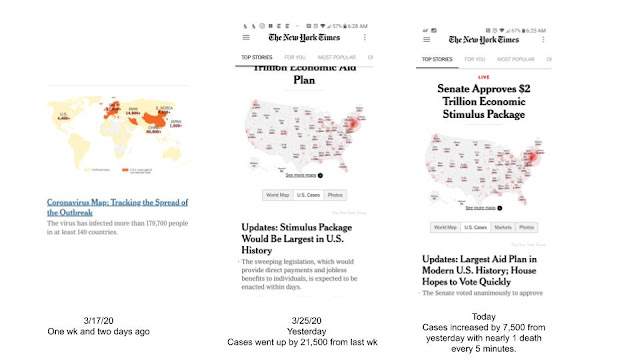 There have been a lot of layoffs on top of the whole world changing in a blink of an eye. In response to the changing environment, retailers are hiring and are desperate for people, if you need a job click here: retailers hiring during coronavirus. Hopefully your state will put provisions into place to pay while you're laid off. It looks like the senate is finalizing a stimulus package for laid off workers, it should be in place soon, if it's not already. Last I read it was going to be in a form of a $1,200 check mailed out to anyone making $75,000 or less, the money goes down the more you make and stops all together if you make $99k or more. In NY state you can suspend rents and mortgages right now if you need to too and they've put all evictions on hold. Watching the news is good too, but heads up FOX news reported the virus was a flu to the public in the beginning and behind the scenes with their family, they were taking precautions to prevent themselves from getting it (among other things). CNN, CBS for example will give you the real. I don't have cable and haven't watched television news in a while. I stream everything and have eliminated commercials from my life, because who the hell wants those?

Overall I kind of like being home all the time, I'm not going to pretend. I can be such a homebody sometimes that this side of me keeps the extrovert in me at peace. It could also be that I just needed a break. I have been on the go since October really. The last trip I took was a long drive back and forth to Quebec City for their Winter Carnival - it's the biggest one in the world I learned! The day after we got back, I hadn't even unpacked yet and news of the coronavirus hit. I had been watching stories about it in China and how they were treating people who had it there and that was about it, I never thought we would be dealing with it here. So getting back and being told to quarantine and not leave the house sounded like the song birds from heaven to me. We did have a great time in Quebec City, which I haven't even had a chance to reflect on given what's happened, but I'll leave that for another post, as this one is getting a bit too long.

I'm off now to get back to work, I'm lucky to still have work in this climate. If you're still with me, thank you, I know it was long. It's been a little while since I've been on my blog and there's been all of this craziness on my mind.


Meanwhile, Spring has sprung... and no one cares :/ 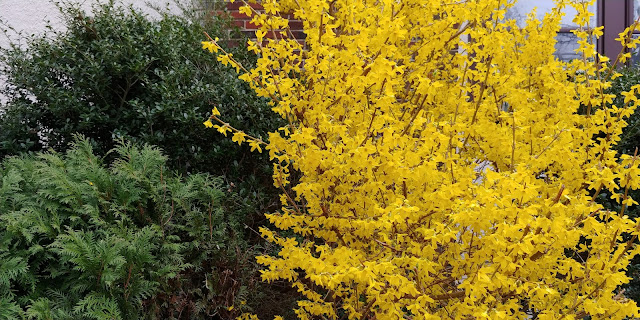 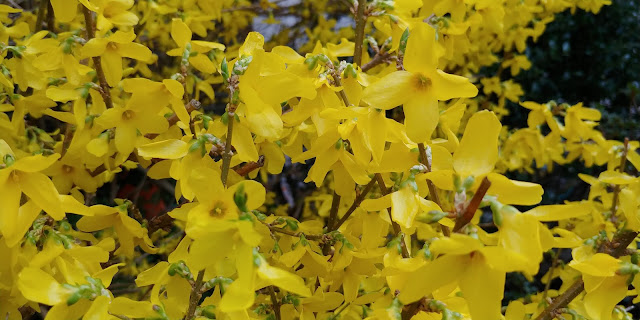 Quarantine yourselves, hide from corona, wipe down packages that come in - coronavirus lives on plastic for three days - that's scientist tested! I'm happy to be alive and relatively healthy.

p.s.
I received a notification from Sprint recently that they're offering free mobile data during this time too. Pretty cool. I use it heavily when I go for walk/runs to listen to music on YouTube. Specifically I listen to the weekly mixes from Above&Beyond. Here's their latest from this week, click here: great music mix from my fave's.

peace out, for now.