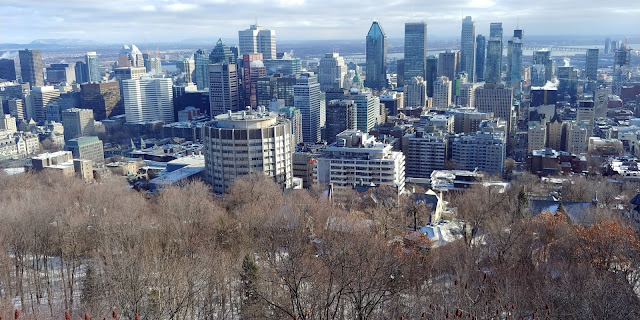 Great morning on this pre-Christmas Eve and Hanukkah. The weather forecast looks good today, high of 40 degrees and lots of sun. I'll take cold and sun any day over warmer, grey and wet. I'm really surprised it's sunny, since that hasn't been the norm this past month. We had "freezing rain" one day. We don't see that too often, so I was curious as to what would transpire. It turns out, it's exactly that, the rain fell frozen - it was different from sleet - I couldn't believe my eyes. It did create beautiful crystals that made nature look like glass though. All the pretty lights this time of year are fun too and help lift our cold spirits. Decorations, tree all ready to go over here on my side. Below is a picture of my boy cutting down this year's tree. It's a tradition now, according to him. 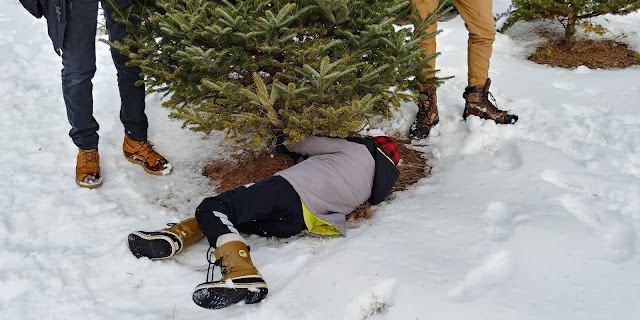 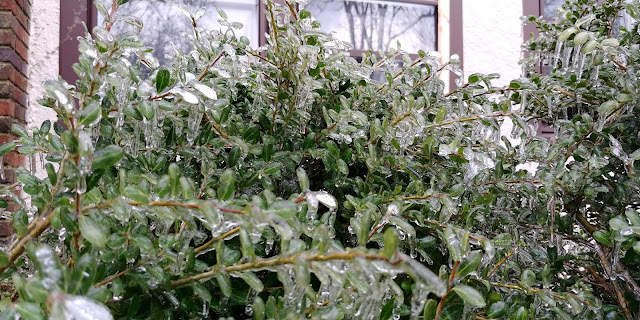 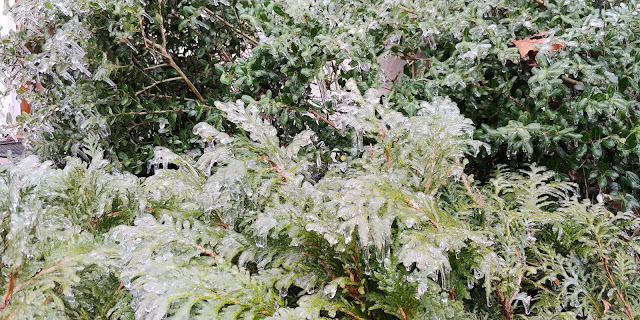 The holidays are moving through fast this year. I kick it off big at Halloween and go above and beyond there and do what needs to be done, for all the others. Not in a Ebenezar Scrooge kind of way, I do still enjoy them. Part of the holidays and why I have a picture / post subject line, was a trip to Montreal. It's not far from New York, about a six hour car ride North, which is how we went. What a great city, that sits on an island, in what seems like the middle of nowhere. Something unique about it, is that French is the official language of the city. It's everywhere: street signs, businesses, subway, menus, everything. I didn't understand much of what anyone was saying, well kind of, since I'm fluent in Spanish and the latin languages have somewhat of a similar flow, but very different of course. I could slightly understand some of what was going on, other than that, it felt like being in Paris again, a bit.

You're probably wondering why a city Northeast of the United States is French (you may not be, you may already know - or you may not care ;>), it's because the French settled there in 1642, with a fur trading post (makes sense as it's as cold as an ex's heart in the winter). Prior to the French arrival, it was occupied by natives. It ruled as a French colony until 1760, when it surrendered to Great Britain. In the 70's, the French speaking people of Montreal fought to keep their heritage alive, as it was becoming too English Canadian for their taste. After a vicious fight, including setting off bombs, kidnapping political leaders, the election of the political party who's sole purpose was to liberate Quebec from Canada, prison and exile... the whole debacle backfired on them and turned off hundreds of thousands of Anglophones, resulting is mass exodus. Unfortunately, the departure included head offices of major businesses moving mainly to Toronto, leaving Montreal in an economic depression. It took a long time, but the city bounced back. You do still see remnants of English influence however.

I didn't take too many pictures of this trip, as it wasn't my first time there. Overall I just wanted to relax, roam, wander and capture moments with my mind and eyes. Here are some things I did manage to capture... 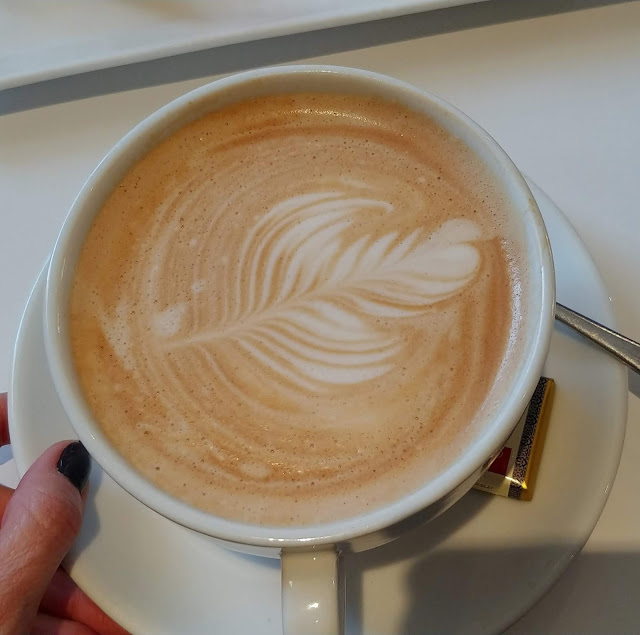 It's a very "foodie" town by the way, they really pride themselves on this and one of the main things I was looking forward to on the trip. I don't have many pictures of the food though, now I wish I took more for this post, but at the time, I just wanted to eat! To find the best spots you have to do a little bit of research, it's easy to do as there are plenty of entities happy to give their recommendations. Coffee art though is always a win, with this one up there in the realm of perfection. 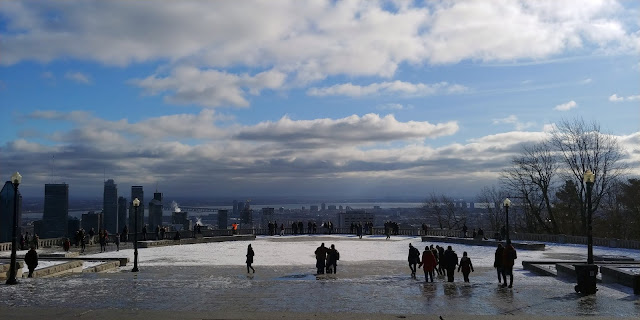 We hiked to the top of the infamous Mount Royal (the country's namesake) and hung out in an old ski lodge - sorry, chalet. As you walk out of the chalet and onto the platform, this is the view you're first hit with.

When you get to the edge, everything opens up, including my perception of how big Montreal is. It's incredible, there's nothing north, south, west and east of the city, yet there it is, a fun, happening city with two million plus people just out there in the wilderness. 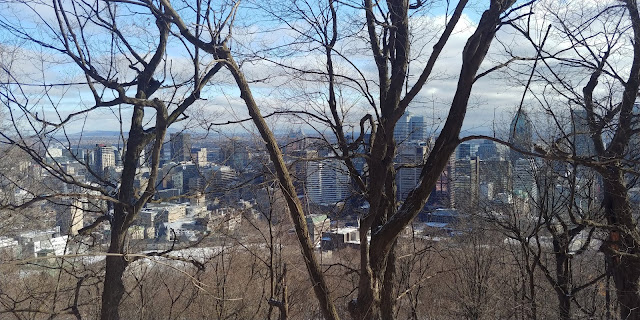 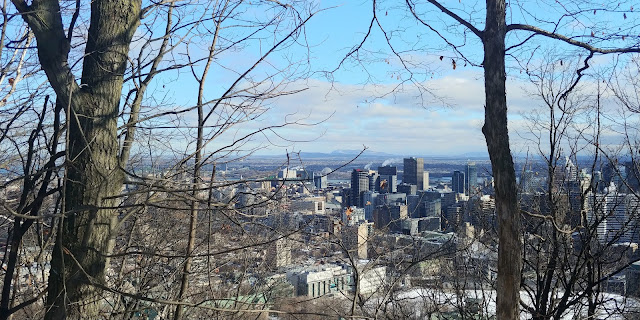 Definitely an "on top of the world" moment, with fresh, clean air to breathe into the lungs and through the body. 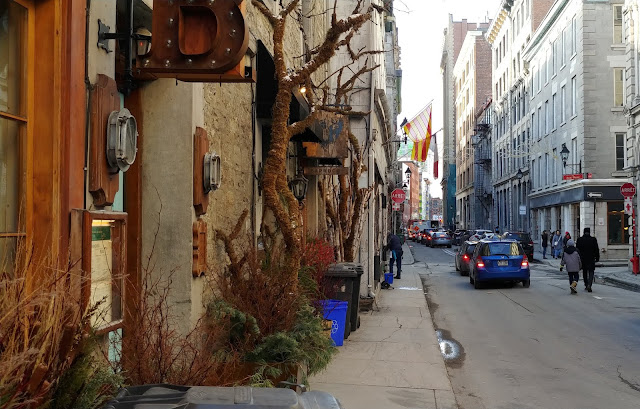 This is old Montreal, the part we stayed in. Really old, the buildings were built around the 1800's. I find old buildings and areas very interesting, to think of all the people who used to walk the same streets and live there, yet in an entirely different manner. Strangely enough, I've always chosen older buildings of some sort for my own personal living arrangements. New homes are great too of course, but I just love the warm energy and familiarity from old places. 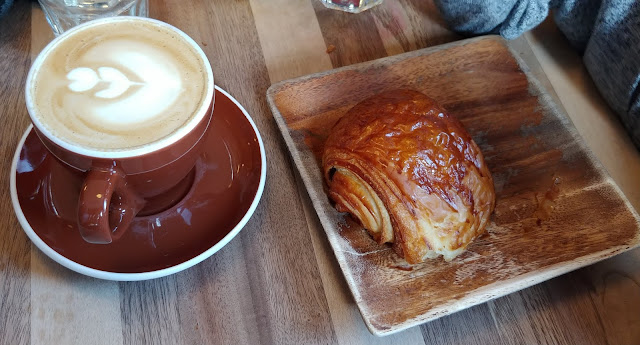 My idea of a perfect breakfast. I do start the day with healthier choices for the most part, but there's no way on earth I'm going to deprive myself of these kinds of luxuries. I hope you don't do that to yourself either, having something like this every now and then will not change your body. If you think it will -- even a little bit -- you are way over doing it. Relax and enjoy life's pleasures, you deserve it...and so did I!

The party and food continue hopefully (for those who are lucky enough, this time of year can be a stressful time for people who are less fortunate), Christmas (for those who celebrate) in two days and New Year's Eve! A fresh start, reset, reboot, however you like to look at it. Instead of looking at the new year ahead, as we normally do at this time, this year we look at the next ten years. I have a good idea of how I'll be spending my next three years -- knock on wood -- I think anyway. The seven years after that...no idea.


Wishing you and yours a very happy holidays and HAPPY NEW DECADE.