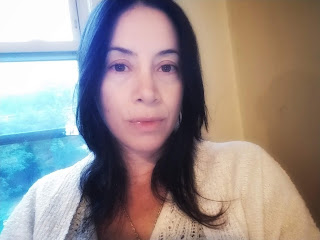 Hi, I'm back, with a stupid selfie and all. A lot of change has happened over here on my side since I was last on here. How about you? Anything new since you last visited this blog? Perhaps a job change or a new relationship? Maybe a move to a far off place or neighborhood? If so, change is always good, even when it feels bad at the time. I was laid off from a job once (okay fired) and it turned out to be the best thing. Of course I was miserable the day of. I had no money saved and rent in New York City to pay. I handled it by taking a job that was beneath me for about a year and then I landed a great job, which led to another amazing opportunity, all of which would never have happened had I stayed in the job.

That was all many, many, many, many moons ago. Recently, I changed jobs after three and a half years. (I left this one on my own accord) The environment at the company turned sour, imagine "Lord of the Flies," only with the employees, as what tends to happen when companies are failing. So, I decided to leave and found a company that's much better, so far. My radar for deteriorating situations is strong, so I'll be able to tell when I have to go. I hope it's not anytime soon, I'd rather stay a long time, but when it's time to go, it's time to go. Everyone on my new team has been there about five years and seem genuinely happy. When people aren't happy with their jobs, it comes out pretty quick after getting to know them. I have an idea of one person out of about eight who doesn't seem to like it. Then again his work acumen sucks. Not a real "go-getter" if you will, so it could be his own internal turmoil spoiling his work ethic.

Meeting new people is the fun part, I love all the different personalities. Sometimes I think we must all be the same, how could we not, we're all human. But oh no, we are not, we're very different in the way we think and act. I look at certain situations and think others would see it the way I do (or a human would). For example, with my own sisters. You would think sisters would be at least similar, but oh no, all four of us are polar opposites. Just last week, my sister Jessica, sent a family text saying she wants to do "Secret Santa" this year with everyone for Christmas. When she sent the text I saw it at first as she wanted to be scrooge for Christmas and when she saw my reply, she saw it as I didn't want to "miss out" on any gifts I could get. After a bunch of "you're rude," "no you are," and a few days of silence to buffer it out, it turned out, she would rather spend on gifts for the needy and volunteer. (She's actually done it one year so I know it's not bullshit.) On the other hand, I personally would rather get gifts for everyone, as I enjoy shopping for those I love.

Just one small example of how people think differently. I suspect this type of opposite thinking is happening daily on various levels. While all humans are alike in our body make-up and having emotion, feelings and intelligence, we're completely opposite in the way we process information. I don't know if the lesson of my Christmas story is to pick up the phone and talk versus text or just listen more. I'm going with the latter. Of course there's blatant right and wrong and we can tell that right away. I'm referring to situations that are less obvious, such as, one mother lets their child have long hair and run wild, while the other cuts theirs into a crew cut and gives them little playtime, while another mom chooses a mix of both. We can't say who's right or wrong, they're just different ways of living. I could make a list ten miles long of how people think and act differently, because when it comes to the human mind, we're as different as night and day could ever be and it's always such a surprise.