Member Of The Family

Diane Lake, a member of the Manson family, released her detailed story about her time as a Member Of The Family, in a chilling new book. 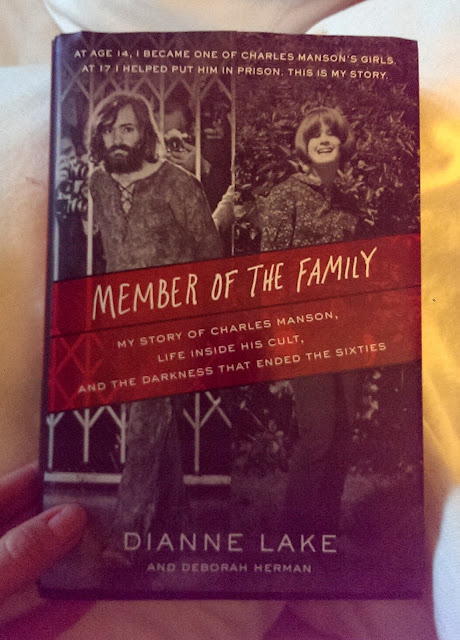 At the height of the counterculture, Diane was just fourteen when she joined "the family" in 1967 and lived with them for two tumultuous years. The end of her stay - and of the hippie movement for that matter - being of course, the Sharon Tate murders in the summer of 1969 by Diane's new family. The book isn't just a tale of a young girl who joins a murderous cult, it's one of a family who lost their way and the price their young daughter paid for that loss. Diane recounts the years leading up to how on earth she could have ended up in such a predicament. After learning about her journey, it's no wonder at all why she ended up where she did.

Hippies were peaceful, loving, free-people spreading a movement of open-mindedness, free-love and thinking. It attracted all types of people from painters, writers, accountants to everything in between. Diane's father heard the movement and adhered to its calling. I don't want to divulge too much in this post, because as I always do when I write a review on a show or a book, I would hate to be the cause of ruin of anything good for anyone. Let me just say this is a massive page-turner of a book. If you've ever been interested in getting a detailed account into what hippie life and the Manson family was really like, this is it.

The Manson's trials and tribulations accounts are many, but Diane's story was kept quiet by the family, because of her age, as she was the youngest of his "girls." Being kept away from all the interviews and photos taken of the family were the only boundaries Manson imposed upon Diane, everything else was full-fledged family involvement, including participation in the regular LSD rituals and family "love-making." The book is also a look into the making of killers and how easily Manson manipulated his followers into what ultimately led to the death of seven people.

Here's an excerpt from the book:


At the first Human Be-In at Griffith Park on January 14, 1967, people were encouraged to bring incense, pictures of their own gurus, flowers, and anything the color of gold as gifts of the maji. Like those the wise men presented at the birth of Christ, these gifts were to represent the birth of a movement where people could be brought together in bonds of love.

There was a small crowd at the first gathering, about six hundred people, and my family blended right in. There was no central organizer. People simply created a makeshift bandstand to the north side of the Greek theater in the park and did their own thing. Attendees played acoustic guitars, banged on drums, and plunked out tunes on African thumb pianos. I had never seen anything like this. People were scantily dressed, but there was no full nudity-not that I would have been surprised. Everyone was caught up in the same fever and no one was a stranger.

For this be-in, my father shirked his typical work clothes-slicked back hair and shoes-for a fringed suede vest, blue jeans, and sandals. Freed from the greasy pomade styling of the workweek, his hair stuck up in tufts as if it had been waiting for the right opportunity to express itself. My mother adapted to the dress code of the fashion free by wearing a long, flowing skirt with a cotton peasant blouse. She also wore a headband across her forehead and made one to match for Kathy. I wore plain shorts and sneakers, but when someone handed me some beads I gladly wore them around my neck.

This was a be-in in which everyone was encouraged to just "be" themselves. Most people were older teenagers and people in their twenties. While there were little children running around with their faces painted, they fit into the scene as naturally as the beads and feathers. My parents were probably older than others there, but they looked the part, so no one made them feel unwelcome.

That part is at the beginning of this fascinating, interesting and mind-blowing story of how Diane Lake lived life in her early years. It's a tale of survival, strength, courage and love. I read this book so fast it was ridiculous. I tried to slow down, it just wasn't possible because it was that good. I had finished it just before the holidays started and it haunted me throughout. As I sat by the festive tree with my own family on Christmas, I was drawn back to Diane's story and was enthralled at how resilient the human mind can be. Incredible. So yeah, a must read.
Labels: Book Review