We remember the Holocaust, today marks the day the concentration camps were liberated in 1945. More than six million people were murdered, mainly Jewish people, gypsies, POW, homosexuals, communists, disabled, Jehovah Witnesses, Romanis and Soviets. Of the six million Jewish killed, 1.5 million were children. The Nazi's wanted to exterminate the entire population of Jews in Europe, led by the devil himself, Hitler. First, he had them join registries in their local towns, next was banning them from parks and other public places, next came forcing them to wear a star so they could be easily identified (not to mention the ongoing scrutiny and discrimination they faced on a daily basis), after that, they were forced out of their homes into ghettos. From the ghettos, they were moved to death camps in Poland via trains, where they had to remove their clothing, belongings and forced head shavings upon arrival. Some were put to work, others were put to death. At the Treblinka death camp, anyone who arrived was dead within fifteen minutes. At Auschwitz, the people didn't understand they were going to die, they thought they were being sent to work. The "work" consisted of registration, clothing removal, coordinating people into the gas chambers and cleaning up of bodies. Some survived to tell the tales of the beatings, medical experiments, torture and death they were exposed to.

We have to remember this time to understand how so many people could be brainwashed into committing mass murder by one crazy dictator. Trump is saying he wants Muslims to register. He is also saying he wants to put out a list of crimes committed by immigrants. This is the EXACT same thing Hitler did. Anyone who cannot see this needs to wake up, take notice and take action. Protest, get involved, call your local congressman, voice your opinion. Not all Muslims are terrorists, not all Mexicans are drug dealers, women and the disabled must be respected, we're all homosapien. Don't wait to be asked or think other people can take care of it. To go from having people register at their town hall, to forcing them onto trains and straight into gas chambers fifteen minutes after their arrival, happened in a span of five years. The German people never thought it would lead to where it led. We must remember what happened to all of those innocent people in the 1940's, it happened, it was real. People were brainwashed into killing, because their leader told them it was right. Educate yourself, if you don't like to read, watch a documentary. You need to know about history, it's not something to ignore, especially in times like these.


Today we remember what happened and we must never let it happen again. 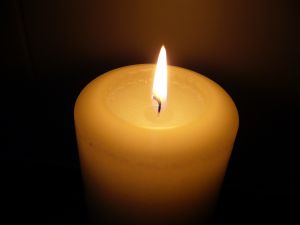