Back in the day when I was preggers and nursing, I went vegan, because I wanted to feed my baby boy only the healthiest of foods. I've been influenced by vegetarianism for the longest time, my best friend is one and always encouraged me to stop eating meat, because that shit is gross. I like meat though, a nice steak, some well done pork chops, yuum, I know it's not healthy and eating too much can cause cancer (hello, bacon), so I refrain and limit my intake to about once a month.

The same friend sent me a book about eating healthy and it showed me how cow milk has puss and blood in it from the cow's teats, I almost threw up, it's fucking disgusting. Those poor cows are stuck under machines and pumped and pumped so much that it's not wonder they get all bloody, some nasty shit. These days, I'm going back to being a vegetarian because I'm getting sick of eating meat, I drink almond milk, but I still eat eggs, I don't think it harms the chickens and they have protein. To each their own, I get it, meat can taste fucking great.

On my current quest to eliminate - or rather limit my meat intake, led me to the vegan cookbook, THUG KITCHEN, which also happens to be a New York Times #1 Bestseller. It's huge in L.A., but of course that's far, far away from New York. New York isn't really into all of that healthy shit, we still like a big juicy steak, smokes, cigars and killer cocktails. I have a bit of the L.A. vibe going on, I'm into all that hippie shit, meditating, crystals...so I was happy to come across this cookbook and let in more of those West coast sensations, and because the pictures of the food looked fucking amazing. 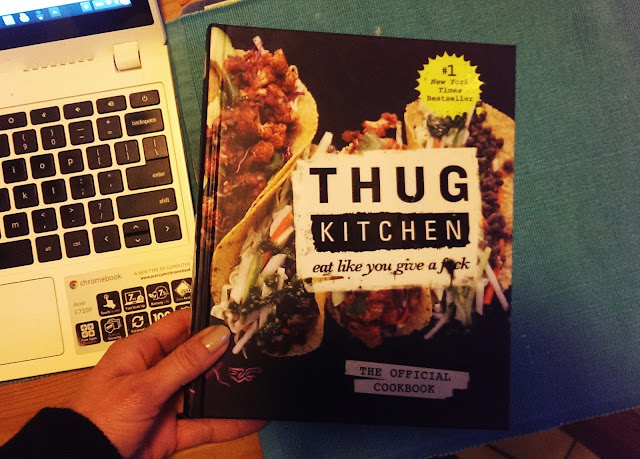 I'm not much of a cook, but this cookbook makes it all easy as fuck. Ever wondered what a "mixed mushroom and spinach lasagna" tastes like? It's fucking awesome: 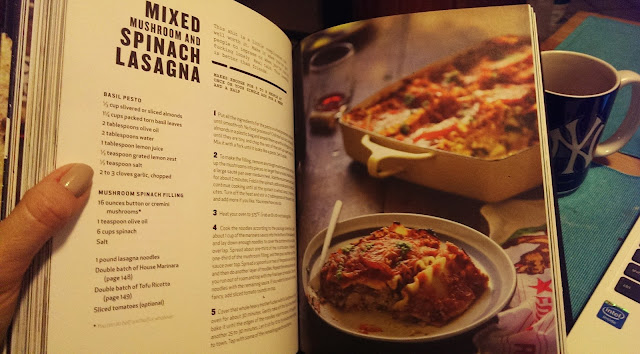 Think it might be too complicated to make for your dumb ass? That's what I thought too, then I just followed along the easily numbered directions and if I can do it, so can you motherfucker, and get some good laughs in along the way: 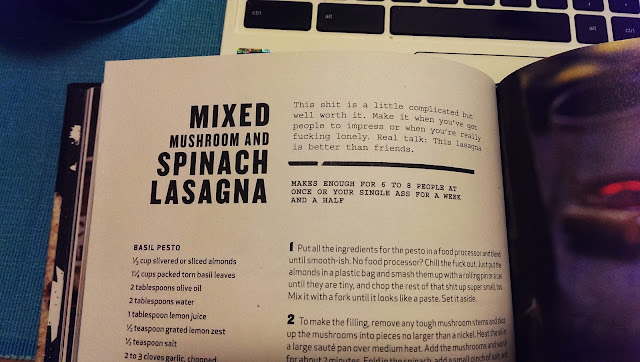 Last night I opted for the Roasted Beer and Lime Cauliflower Tacos With Cilantro Coleslaw recipe, I couldn't believe how good it looked, the authors are fucking geniuses: 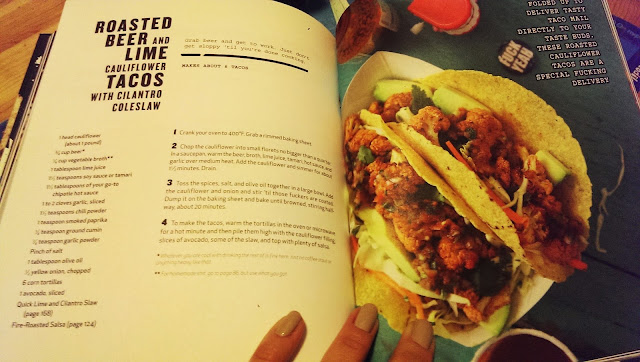 Sorry I don't have pictures of my actual meal, I'm not a food-picture-taker, when good food is in front of me, my first instinct is to eat that shit, not take a picture of it, but to each their own, I know a lot of people love to do that. I can tell you, it turned out exactly like the picture and was insane good, so good I might even make it again tomorrow. I was full and knowing it was healthy made me feel like a fucking rock star. The night before last, I went for the Yellow Split Pea And Green Onion Lettuce Wraps, holy fuck!, so good. Easy peasy to make too, just read #1 below, go on motherfucker don't be lame, just read it: 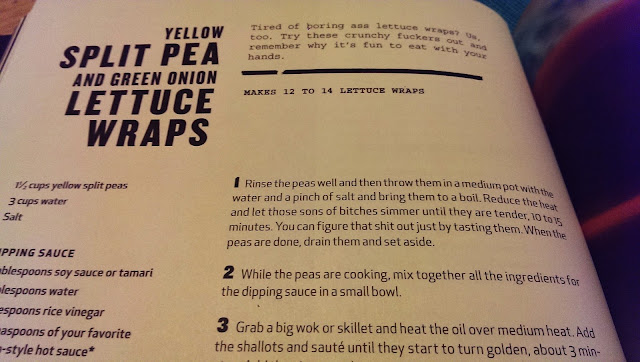 Didn't read it? Lame-o. Here's how the authors describe them: "Tired of boring ass lettuce wraps? Us, too. Try these crunchy fuckers out and remember why it's fun to eat with your hands." They're right, they were so damn tasty, another one I'm going to have to make again in the next few days. There's so many great ones though, I can't wait to try the Vegetable-Noodle Soup With Ginger Miso Broth. The authors describe it as: "Stop fucking with that deep fried ramen and its foil-wrapped flavor fibs. This soup is perfect for when you feel a cold coming on but your ass is too worn out to cook. Take the few extra minutes to make this and put that ramen back in your zombie apocalypse kit where it fucking belongs." (Hysterical)


Here's some snaps of the authors, Michelle David and Matt Holloway, from their instagram, bitches: 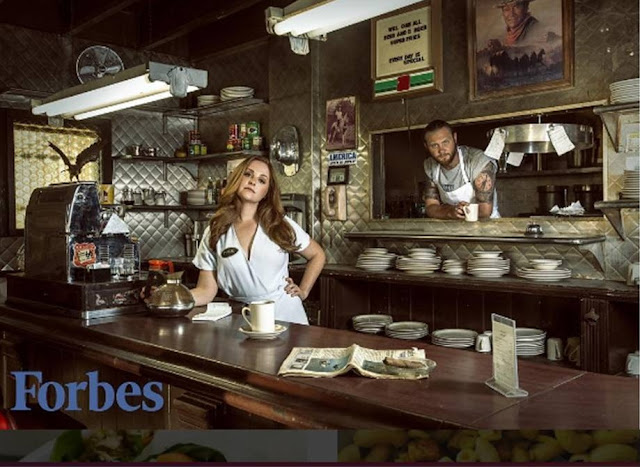 
And more of their bomb ass food... 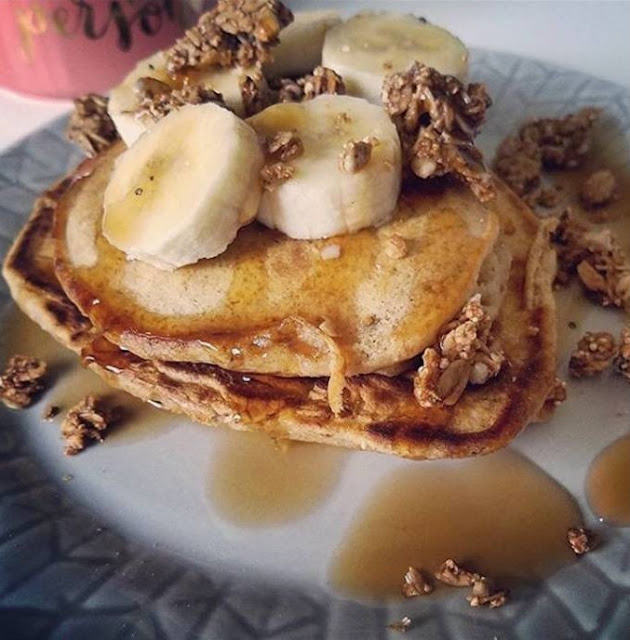 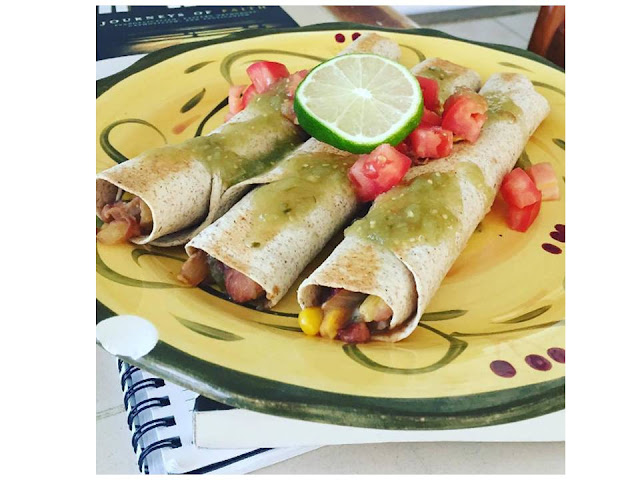 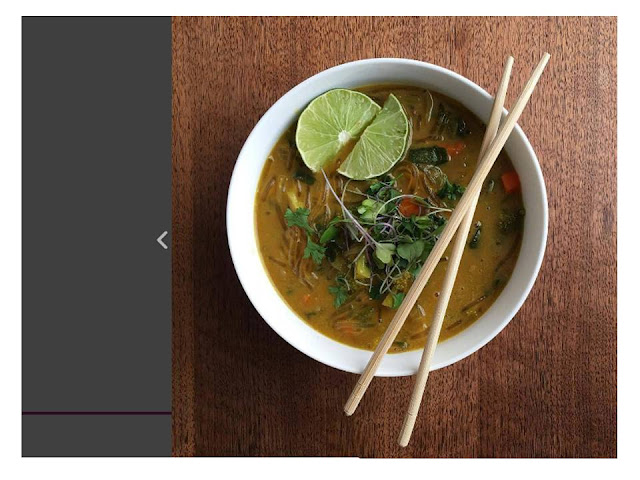