The new season of the Real Housewives of New York City is currently airing on Bravo (my guilty little pleasure). Most of the women on the show are not housewives however, so the casting doesn't make much sense to the overall theme of the show. There are two actual housewives out of the entire cast, Jules, who is new this season and Dorinda. The others, they are not, some are businesswomen, there's a writer and a singer. The term housewife is old-fashioned to begin with and not helpful for women's lib. Wives, or how about just women, who choose to stay home and take care of their children, work hard in the home - there's a lot to do. Using the word "real" to describe these women as housewives is incorrect. It is what it is, a giant contradictory.

Heather "Holla," was cut this season. I remember her because of her Berkshire home, as the Berkshires is one of my favorite places to visit. The way Andy Cohen fires the women is so harsh, one minute you are in, and the next, you are out (said in my best German accent). Jules is a better replacement. Women and small children can be cruel. Before the women on the show were told she had an eating disorder, they were all quick to jump in and talk about how skinny she is and that there "must be an issue." On the last episode, Sonja had something to say to her the first minute she set eyes on her, "the caterer says you need to eat something." On her latest blog post, she did address this and owned it at least and said, "boy did I put my foot in my mouth."

Carole had so much say about how skinny Jules is, which shows her immaturity as she's as skinny as Jules. Jules has a fresh outlook on her disorder. Her body is a tattoo for that time in her life. The way she talks openly about something that is painful to her, is an impressive show of her strength. She's sending a message to others who are suffering, or who have suffered from an eating disorder, that you can overcome. Her skinny body is turning into a symbol of power and will be inspiring for young girls or women. Because of her body, she'll always be told she "needs to eat" or "grab a burger," etc. The way she's risen above it with these mean ladies, has been nothing short of impressive. Being told those things is not a reinforcement of her need to be skinny. Skinnys can have a hard time gaining weight, if they internalize that, it could end up with an unhealthy situation with food. In Jules case, the worst kind.

Sonja is over the top and has a lot of energy. She's a great candidate for the show, a true character. She isn't a housewife though. She has several different businesses and her latest venture is a prosecco. Prosecco is an Italian sparkling wine. A sparkling wine can't be called champagne, unless it's made in Champagne, France. In other words, prosecco looks like champagne, tastes like champagne and even acts like champagne, with all it's glorious bubbles. I guess she's targeting a 21 to 28 year old female, because those are the only aged women I could see, who would be interested in drinking from a bottle called, "Tipsy Girl." I don't need a bottle to remind me that I'm getting tipsy - we know! Sonja is like a perennial 25 year old.

Ramona's white wine is named, "Ramona" and Bethenny's vodka, wine and ready made cocktails are called, "Skinnygirl." Sonja jumping into the liquor business wasn't a far stretch, doesn't it seem like a lot of the various Housewives from all the shows have done it? In the previews, Sonja claims she didn't come up with the name, even if she didn't, she would have the final say in whether or not to use it. A simple, "it's too close to Bethenny's line," would have been an obvious thing to say. Especially given the fact that Sonja sees Bethenny as her mentor. How someone younger is an elders mentor is beyond me, but that's what she says. We already saw a glimpse that Bethenny wasn't too happy about it. I'm sure in true Bethenny fashion, she will have no problem telling Sonja exactly what she thinks.

Bethenny seems a little bitter and angry this season. She is going through a bitter divorce, so her overall demeanor is understandable. She has a lot of great things happening in her life and a lot of not so great things. It's great when all the stars line up and you're on national television starring in a reality show. It's an interesting twist when there are other public matters happening, such as Bethenny's divorce and Teresa's conviction, which takes a toll on their personal life and going through it on national T.V. Bethenny will get through this, she's staying true to her roots, she's real, the hard times are showing, which is what we love about her. Once she gets past this difficult time, I'm sure we'll see her true nature come shining back through. With Bethenny on the show, it's keeping it reality, while I'm sure there are plenty of scripted parts.

Dorinda made the cut again. The other women are hard on John. You would think they would know by now that you can't make anyone stop dating someone, they have to want to do that and only then will they. The women have a right to their opinion though, especially for the #RHONY as they're making their lives public and open for people to comment. If Dorina and John want to party it up and drink, it's their business. When it begins to interfere into the lives of the women, that's a different story. To John's defense, the women have been talking non-stop about him in a negative manner since the beginning. This is the first time he's stood up and fought back. Bethenny has been talking poorly of him and he has kept quiet. At the Gansevoort, he told her just how he felt, liquored up or not, it would have come out eventually, maybe not on her birthday though.

Last but not least there is Luann. Ramona complaining to Sonja about Luann staying with her and calling Sonja's place a "brothel" was pretty funny and seems to have been fueled by jealousy. If Luann and Sonja want to share a place and go out on the town there's nothing wrong with that. If either women choose to bring a man home, that's their business. Ramona is quick pass judgment. Both women are divorced and their children are gone from their homes. If Ramona wants to start paying their mortgages, then she can have a say about who and what they do in the home. She is just like them too, so her judging them is hypocritical. She is pure Drama, I guess that's why she's still on the show.

This season we're seeing some of the women in a new light, others with new businesses, boyfriends and attitudes. The drama came right out of the gate, just as we expected. They all always default to, "why can't we all just get along?" With a group of characters like this one, that may not be possible. We, the audience, watch it all play out. There's definitely some unintentional comedy there that's a nice break from the life's daily routines and the non-stop politics the media can't get enough of. That's it for me for now on the #RHONY...Fab out. 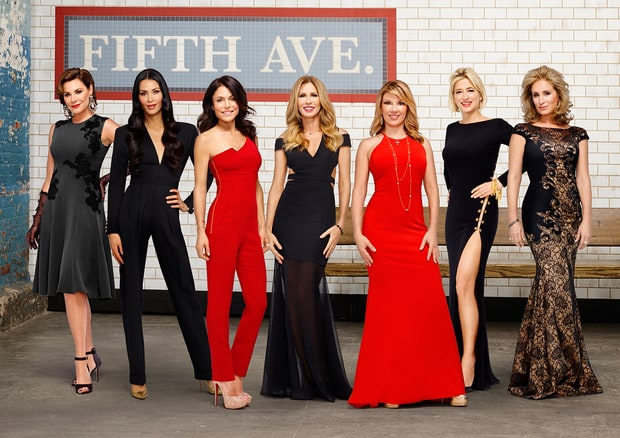