The election is eight months away and the campaigning is in full swing. It's too much though in my opinion. Every single day then from here until NOVEMBER we have to hear about it? I wonder if these lengthy discussions will be enough to get Americans to actually go out and vote? If you're an American, are you voting? If you're 18 and above, you have the right to vote for our next President. Maybe somehow, I don't know what that could be, but it could be possible you don't know who the main candidates are at the moment. In case not, they are: Hillary Clinton, Bernie Sanders and Donald Trump.

Voting for someone just because you like him or her is not enough. I'm not going to vote for Hillary just because she's a woman. I would have to be in agreement with her on the political issues and her being female would be the icing on the cake. I am liking the stance Bernie Sanders is taking on some of the issues. I'm not aligned with Trump on enough of the issues to support him. If you're not sure who to vote for, the below outline can help. Before reading the candidate's view, first decide what you would do in each case and then read the candidate's stance and see who you're aligned with:

Immigration:
This is in regards to people who are here illegally and some have children who were born here so are American. We're talking millions of people.
Clinton: would not deport undocumented parents, would support them to citizenship alongside their children.
Sanders: he too supports a path to citizenship to keep families together.
Trump: would deport undocumented parents.

Gun Control:
Tighten the laws to make it harder to purchase them or not.
Clinton: supports tightening gun control laws.
Sanders: he's not in full support of tightening the gun laws surprisingly and thinks he can bring us to the "middle" on guns laws.
Trump: he's flat out against any restrictions on guns.

Syrian refugees:
These are the innocent people who lived there and left to seek safety for their families from the daily bombing, gunfire and air raids.
Clinton: would allow 65,000 with a careful screening process.
Sanders: doesn't have a specific number but thinks America should take responsibility in helping them.
Trump: opposes letting them in at all. He said if our current President lets them in, he would send them back out.

Climate Change:
This is an issue that has been scientifically proven. It's not a theory.
Clinton: understands climate change is affecting our planet and is interested in putting energy choices into place that can generate renewable energy, such as wind or solar.
Sanders: understands climate change but doesn't have a strong plan for alternate choices.
Trump: doesn't believe scientists.

ISIS:
They're all against it obviously and want to take them out. 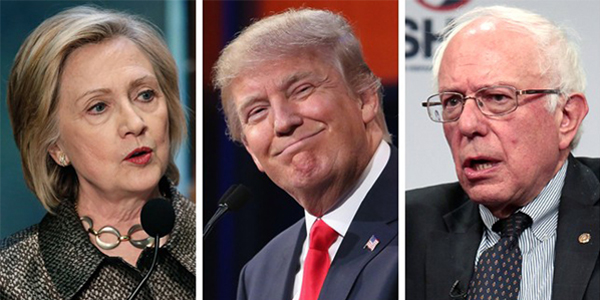 Did I not include an issue that's a big one for you? What are your thoughts?