I'm not sure yet. As we head into Easter, it's a time of year that makes me think about religion and my faith the most. I've always had a thing for it. I grew up very Catholic, in fact, you could call me the epitome of Catholicism. I went to a Catholic school growing up, meaning there was a Cathedral attached to our school house (or two story building as I recall it now), some of my teachers were nuns and our priest was part of the faculty. It also meant we went to church every Tuesday with the school and were in the Cathedral what seemed like every other day confessing our sins:

"Dear Father, it's been one day since my last confession. Last night, I screamed and yelled and ran around the house driving my mom crazy. At least that's what she told me. I also didn't listen to my parents when they said it was bedtime."

What sins could little kids really have? The idea I guess was to prep us for adulthood so we would think about our actions and realize we will be held accountable for them. That's fine I guess. Back then it seemed like a ridiculous chore. I remember always asking my mom and dad why they didn't go to confession. They always responded with the typical parenting run around that I find myself doing with my son now. Communion was always another strange one. Sometimes my parents went and sometimes they didn't. On the Sundays they didn't, it would become the topic of discussion amongst us girls. We would get up when it was time for the Eucharist, yet their bottoms seemed to be glued to the pew.

The church was ingrained into our lifestyle. Not only did we go throughout the week, come Sunday morning, it was back to the Cathedral with the family, followed by an after church "festivity" of some sort, such as drinking lemonade and eating donuts on the lawn. Come Sunday night, it was back to the church yet again, for Sunday school. At one point, I had memorized the entire Sunday sermon, I could have easily subbed in for the priest. (I could probably still do it to this day.) The amount of church in our lives was a bit excessive. It remained a part of us as long as my parents could, until we turned 18.

Now, I'm a Buddhist teetering on Atheism. I don't like labels though, of any kind. I'm not into clothing labels, shoes, bags, cars or any of that. As long as I like how the clothes or cars look, and that they make me comfortable and they work, I don't care if it's from Prada, Lexus or H&M. I don't ban labels, I just don't care about them much. I do care about quality, but you don't have to buy the most expensive thing to get that. When it comes to religion, I've studied some of the more obscure ones for various reasons throughout my life. Not because I wanted to rebel against Catholicism, just for the simple fact that I was curious about other people's beliefs. Naturally I would assume this is the case for most?

When I look back at the Catholic church, I only have warm memories. The beautiful Cathedral with the large, oval shaped ceiling, the burning incense, candles, singing bowls, silent prayer and the loving nuns and priests. In all of my years with the Catholic church, I never knew of or heard of any abuse. Catholics were just as shocked as the rest of the world when those scandals came out. I've never said, "I'm leaving the Catholic church." In fact, when I visit my parents and they're going to church, I'll sometimes go with them. It's relaxing, a quiet time to enjoy a place where everyone is on the same page in taking a time out to chill.

My parents did their job, they taught me how to be spiritual and together with the church instilled in me to "love thy neighbor," "peace be with you," and to be kind, compassionate and loving. I'm now passing these fundamentals of being onto my son. I've taken him to church a handful of times. A part of me is still Catholic and always will be. I'm also aligned spiritually with Buddhism and with that I enjoy the parts of the Catholicism that I liked the most: the burning incense, candles, silent prayer (meditation) and singing bowls, in fact, these spiritual elements were derived first from Buddhism and borrowed by Catholics, which is fine. I have no interest in trying to make others believe what I believe, to each their own.

My son considers himself a Buddhist and meditates with me. He knows about the Catholic religion and understands (for the most part) that it's how I grew up. I will be responsible for instilling in him the same fundamentals as my parents and the church taught in me. As he grows, he will be free to choose what spiritual path he is interested in following. We have an open forum. For example, at the moment he says he's a Republican, I don't try to sway him either way - just as my parents never tried to sway me when it comes to politics - but it's fun to see him have his own opinions. (He says he wants to keep all of his money and that's why he's Republican. Classic. He's seven.)

As far as my current beliefs, I enjoy the Buddhist mentality. Some Buddhists believe in God and some do not. The Buddha was a human who lived 500 years before Christ. He was born into a royal family and became interested in the questions of life. He left his royal upbringing, cut all of his hair off, discarded of his eminence and retreated to the forest to meditate for six years by himself. There, he learned about suffering and how to live life through it. He ultimately found nirvana (the end of suffering forever). He went on to teach others how to do so. The Buddha believed in many Gods, as was the custom during his time (God of rain, sun etc), but he never considered himself one, nor did he want others to do so. He was a teacher.

I've been contemplating lately if I'm an atheist. I always thought I had a special connection with God. Things have happened in my life for example which have seemed like miracles. As my religious curiosities grew, I realized there isn't a being of sorts on a cloud, waving a magical wand, making things happen. Maybe it's a higher power, a positive force of some sort. How could this being or force care if a prospective client or employer calls me, when there are children being gunned down by madmen? I asked this question to Catholics and the answer was, "God works in mysterious ways." This isn't a good enough answer for me. Another said it was the Devil. This answer made slightly more sense. So there's a God and Devil who are trying to control our everyday life?

I think we are in complete control of our own lives. I think God and the Devil are our own consciousness weighing out good and bad, and our decisions, paths, passions, motivations and drives are what control the outcomes. I don't think it was God who made the prospective employer call me, it was my fabulous resume and all the hard work I've done over the years. Why shouldn't I believe it was me who made the phone ring? I believe in a higher power -- our brains, our thoughts. Our minds are powerful and can allow us to live through the good and the bad. I don't think the horrible things that happen in life are the devil's actions, such as the recent bombings in Belgium, people made that happen. As the Buddha says, life is suffering, it's learning to live through it that's a balance. 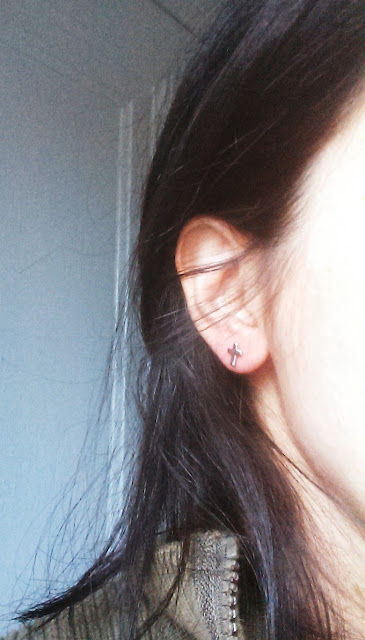