The bitches are back. I'm not a fan of reality television at all, but this show has sucked me in. I watch this series and sometimes if I'm completely vegging out on the couch and can't manage to pick up the remote, I'll end up watching some silly show, such as one called Arranged Marriages or something or other. It's not even worth me looking up for the correct name because it's so bad. Let's get right to it. Noticeably absent and per my prediction, Brandi is gone. Good riddens I say, she was nothing but mean, mean, mean. So bye bye to the wicked witch. Moving on to the nice witch, Yolanda. She's the queen of the season. What I love about her is she stays true to her roots, a lovely, beautiful woman from Holland.

It seems as though the show is editing the footage to make it look like Yolanda is suffering from depression, because of her split with her husband. In case you didn't know, they have split, she announced it on her blog recently. I'm sure that's part of it, however she was diagnosed by a doctor with Lime Disease. Granted, we've never seen the documentation nor has any of the women on the show, but she doesn't seem like she would lie about something so big. As a mere watcher of the show, I am only able to speculate. In her blog, she is very clear she has the disease and is not happy about the rumors stating otherwise. I love when she shows up to the lunches with no makeup. She spins all of the woman for a loop when she does that. I'd like to see any of the other woman have the confidence to do that.

I love Lisa Vanderpump. Personally, I'm not into the color pink, in fact, I don't like it; however it makes her happy so be it. It looks nice on her. When she asked Erika how her 75+ husband was in the sack, was probably the rudest thing she's asked anyone to date. Older people do have sex, as strange as it may seem, it does happen. Lisa seems to have a lot of it, according to her. It's a change of tune for the star, as in the beginning seasons, all she did was talk about how much sex she was not having. If they've fixed things up in the bedroom, then great. She's even referenced doing 69 with Ken. 69! If that's the truth, god bless her she's my hero.

Kyle is left alone this season. Kim has been having a lot of issues as of late. I hope she gets the help she needs. Kyle feeling the women are insensitive to her to bring up Kim's problems on camera is warranted. Kim was on the show so she did give up a lot of her privacy by doing so, but she's not on now, so she's no longer fair game. I don't blame Kyle and the other woman for wanting to escape the nightclub hotel. I have stayed at that hotel in the past when it was another name - it's always changing - and it's no good. They make it look nice on the show. Maybe they've made changes and it's better now. The house they rented looked much more enjoyable. I would blame the party planners for not renting a house and throwing the party there, versus the hotel. Fail.

Lisa Rinna and Eileen I'll mix together because they seem to be one. Lisa seems to have good intentions but she likes to stir the pot a little. She is a professional entertainer, so she knows she probably needs to a bit. She has a lot of energy and seems to be fun. She's very much in shape, yet the show never shows what she does to keep her figure. Maybe she's just one of those naturally skinny women. Of course I and anyone else watching the show, are still in awe of her lips. Eileen is just a gorgeous lady. I love her. She and her husband seem to have a nice marriage and her house is incredibly beautiful. I keep meaning to record her soap, but I don't want to get hooked on soaps again. I remember being addicted to General Hospital and Days of Our Lives. They just go on and on and NEVER end.

Erika is a force all onto her own. A 44 year old disco queen who is married to a 76 year old husband. I wonder, if her husband were broke, do you think she would have still married him? Another over the top diva to match Ms. V. The outfits she puts on crack me up. I do like that she doesn't care what anyone else thinks and is true to herself. Next week she'll meet the Queen B, Bethenny. Bethenny is the real queen of all the housewives, so I think that will make for an interesting episode. 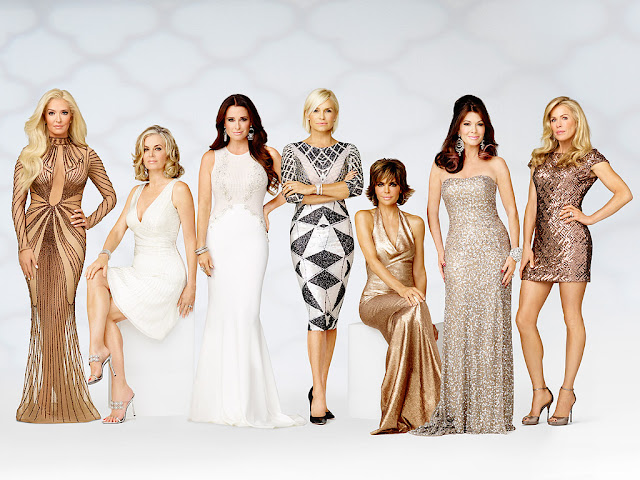 P.S. who's the woman to the far right? They have yet to introduce this cast member as far as I can remember. Erika looks like a real barbie doll in this picture. All of the woman look great here. Kyle's dress looks a little like a wedding dress; Yolanda's dress stands out, I love the pattern; Lisa R's dress is very "Ginger" from Giligan's Island and Lisa V's dress is long and sparkly, very pretty.


Are you watching this season, skipping it or don't care for it one way or the other?