North For The Winter

Great morning on this mild, foggy, late Fall Friday. We'll be back in the 60's today! (?) Walking around yesterday felt like Spring. I'm sure the birds were totally confused. This warm spell can't be described as what we call an "Indian Summer," as we're too far into fall for that, so it's probably global warming. GW is the warming of the earth when the atmosphere traps heat radiating from it toward space; the "greenhouse effect." Carbon dioxide is the main gas changing the climate, as it blocks heat from escaping earth. Humans have increased the carbon dioxide levels by burning fossil fuels, deforestation and land use changes.


This picture from NASA helps explain it a little visually: 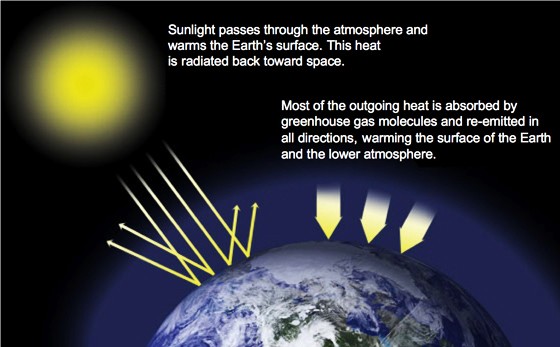 So it's natural for the sun to bring the heat to us and for heat from the earth to go out toward space, even small levels of natural carbon dioxide, such as respiration and the eruption of volcanoes. It's the increased amount of carbon dioxide that is doing the harm. The atmosphere is not able to absorb it and so it becomes trapped, warming the earth. I'm not a scientist by any means but the subject interests me so I read up on it, as I believe it's our duty to do so.


Here's a great article by Laurie David on what we can do in our own space
to decrease our carbon dioxide footprint:
25 Things You Can Do

Here's a great site you can click into
and read about: Global Warming


Have a fabulous weekend ahead, peace and love xxoooxo #TGIF !