My son doesn't want to do his homework, I don't want to help him with his homework, we're screwed. A letter was sent home with the gist of it being the school is sending large amounts of work home so that kids and parents can interact with each other more. I guess they're assuming all we do is watch t.v. all the time or something? ...Okay we do watch a fair amount. We're not just watching t.v. though, we're also reading, writing, playing the piano, guitar, cooking, conversing, building and whatever else we do to keep ourselves entertained in the dark hours of the day. Maybe there are some households that are only watching t.v. and I'm not knocking them, I know, I like the t.v. too, but as responsible parents it's our job to make sure we limit their screen time (all of them). My biggest fear is my son turning into an Uncle Grandpa zombie.

I do appreciate the school taking the initiative for the households who are watching too much t.v.; however, for the ones who don't, we have to endure almost an hour of homework. This probably doesn't sound like a lot for anyone without kids, but for those of us with kids, it's A LOT of time. I like to be involved with my child and that one little hour can seem like an eternity after a long day. The children have already spent the entire day at school and after school is time to give their overworked minds a rest. I have no issues with homework, I do think it should be a max of twenty minutes though, maybe in high school an hour is understandable, but first grade?! I kid you not.

Not only is there a lot of homework, it's also kind of hard. I'm a college educated, working professional and I have to admit, I have to think a good minute about what's in front of me to try and explain it to my child. My kid gets frustrated by the homework and rightly so, it's intense for such an early age. Here, take a look for yourself: 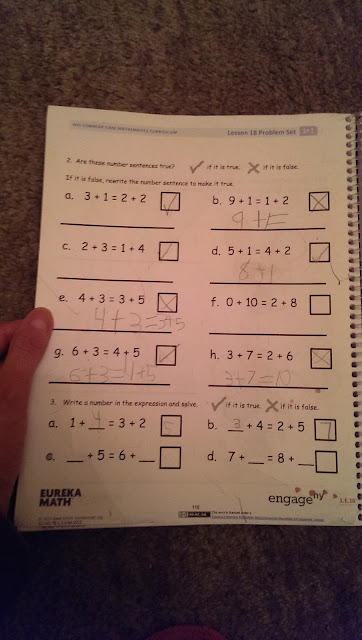 and this is only the homework 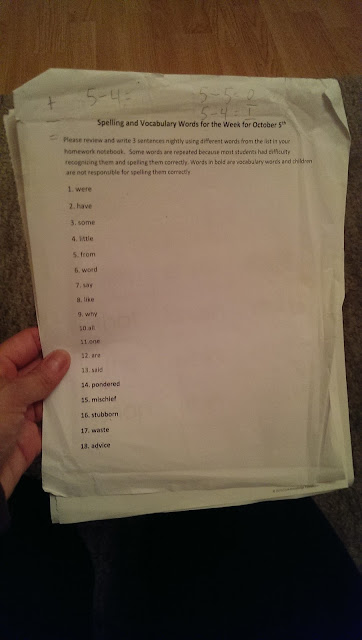 My son's school is part of the Common Core State Standards Initiative. Common Core aims to raise the standards of education for pre-K through grade twelve. In pre-K, my cutie was already reading and doing math, pre-k! I'm not complaining I guess because it's a good thing. The children in China have a much harder curriculum and are more advanced in math and science and one of the reasons Common Core exists, so we can keep up with the rest of the world. Some states have decided not to participate such as Oklahoma, Texas, Virginia, Alaska, Nebraska, Indiana and South Carolina. These states may want to reconsider if all the kids in Common Core are on this advancement fast track. If my child is now writing sentences as part of his homework (first grade remember), his school work is much more advanced than that and by the time he's in second grade he'll probably be writing a novel and solving algorithms.

In my opinion, the math looks as though it's preparing kids for computers, as that is obviously the future of everything we do, so that makes sense. I wonder what the future will be like for those who are not in Common Core? It's an aggressive stance in learning and I don't know if it's such a great thing. Some kids may find it too hard and fail, others may just barely keep up, while others will excel. At the end of the day that's life though isn't it? Maybe it's not such a bad thing to get them started early on understanding that life is suffering as the Buddah says (lol). I'm a strong believer that kids should be free, happy and embrace their creative nature. I also want kids to succeed in life and be prepared. Maybe failing a little here and there at school will truly prepare them for real life, as they will already know from an early age that it's not the end all and that they can try again and succeed. I just wish creative studies were as big as an initiative as math and language arts, that's where they failed.