The movie Back To The Future Part II, which hit theaters in 1989, traveled to the future year of 2015 (to us, TO US). Doc set the infamous Delorean time machine to: 10-21-2015. While we're still some months away from that exact day, we are in 2015. (Don't be surprised if I recycle this thought in October, if I remember) I was merely but a child in 1989, maybe not in body but surely in spirit. This movie was a world phenomena, as everyone is always interested in knowing what the future holds, naturally. So what did go on in the movie that is happening now? Let's explore some of the most memorable predictions...

Video games. In the movie, there were scenes where Marty stumbling upon kids playing video games and using their hands to control the characters in the screen. Here is a video from 2013 no less depicting kids doing just that, using Nintendo's wii:  Kids playing wii.

Video calling. Marty's future dad called his office using video calling. This was a shock to Marty and probably to us at the time as we watched it. I don't know about you, but I couldn't live without Skype today. It seems very normal to ask my family to Skype vs. making a "regular phone call," in fact I prefer it. I spend my entire week making regular calls for business that on the weekends, I like to connect with my far away family face-to-face. Very normal.

Flat screen televisions. These didn't exist when the movie came out. All the TVs used to have giant backs. All that has changed, everything is streamlined, thin and flat. I'm pretty sure plasma flat screens are the only type of TVs you can buy right now. They featured them in the movie everywhere, on billboards (check), homes (check) and in office buildings (check). Cool man.

High-tech glasses. Marty and everyone "in the future" wore these high-tech glasses with blue tooth speaking capability. That sounds a lot like the Google Glasses style. I think the people in the Northwest are all over those, personally they're not my fashion taste. Maybe when they insert the chip right into our brains that will be better, at least no one will be able to see we're geekin' out.

Hover boards. Check, check and check mate. Who else to show us how to ride the world's first hover board, but the world's oldest skateboarder: Tony Hawk Riding Hoverboard.

Last but not least, the grand finale...flying cars. No they don't exist as they do in the movie, flying around in lanes in the sky and almost crashing into each other (who can forget the scene of the flying taxi whose driver screams out some obscenity or other to a car flying to close, some things never change), but they do exist...behold, a real flying car: 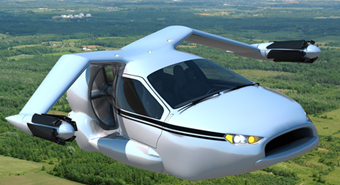 Now if you'll excuse me, I need to scream out to AmazonEcho to lower the volume, I'm not diggin' the song it's playin', while it's at it, it can turn off the light in the kitchen, it's just wasting electricity -- I know, I know, I should be using solar power by now...it is the year 2015 after all :o