Voice Of My Generation

Just when I thought it was a waste of money to have HBO, they come out strong with, "Kurt Cobain: Montage of Heck." It's a documentary by Brett Morgan who used material from Cobain's personal belongings. Roger Ebert said, "This is one of the best documentaries ever made." In a radio interview, Morgan said he was looking through all of Kurt's things and saw a box in the back corner and naturally had to look in. He found a bunch of tapes that no one had ever listened to before. He couldn't believe his eyes he said, and felt strange taking them and said he thought, "I'm a documentarian and I've just found a box full of tapes from my subject." Sure enough, they were tapes Kurt had recorded during his early development and morphing into Nirvana.

Finding tapes in of itself must have been interesting to see. I have some tapes in my attic from my younger days of music I used to love and mixes I would put together to listen to in my car, and I think Nirvana could be one of them. I can't seem to part with them, even though I have no access whatsoever of being able to insert them anywhere. I was one of the teens he spoke to through his songs. Maybe it was dysfunctional communicating to dysfunctional, but when you're a teenager, you're stuck in the "now," whereas, as you get older, you find yourself trying to search for the now and get back into it. Music is a salvation in so many ways. Nirvana's music touched our spirit, and allowed us to be free and act "stupid" and "contagious" and dance...and just be, teenagers.

It's people such as Kurt Cobain, who put into music what we are all feeling. No one is perfect and when you're a teenager, it's hard to understand this, it seems you're supposed to be, as that is what you're being told by the teachers and family members and society and whoever else is "shaping the future leaders of our country." Kurt was no exception, and probably why we were all so attracted to his music, and because it was just really good too, he did create some amazing songs, just what he wanted. There was a lot of pain there too, obviously leading to his ultimate death. I am not a psychologist, I'm just a writer, a fan, and this is my perspective on what happened. I think his passion ultimately choked him to death.

In the tapes, he tells everything about his developing years and how he didn't have many friends or a stable home, moving from place to place on a regular rotation; additionally, his mother says his father was on the verbally abusive side. When you hear from his mother and father, they tell a side of someone who was difficult to live with and they had to move him. As a child it looks like he was hyperactive, according to his mom. I'm not saying his death is because of his family, and neither is the film maker, he presented the facts as they were (in a very artistic, abstract point of view of course), allowing us a look into Kurt's life from his best interpretation of what Kurt left behind, or is this just a final piece of art from Kurt, from the grave? His tapes are very detailed and he was for all intense purposes, one of the greatest artists of all time. His suicide note was surprisingly not a sad one.

He was driven to make his band a success from the beginning, he knew what he wanted. I don't think he expected to reach the level success he attained though. Maybe that was the nail in the coffin. They were young, he was 27 when he passed away. I couldn't imagine being 27 and thrown into the world spotlight the way they were. It's hard to feel sorry for him for becoming a huge success; in a way I can though, he didn't want to become the star, he wanted the music to be, unfortunately, for musicians, they are both tied into one. His music was enough to shine by itself, and it did. It was the videos and the interviews that pushed Kurt into the light. Throughout the interviews, when they were one of the best selling bands of all time, with 75 million records being sold worldwide, you can see him nodding out and yawning -- that could also have been the heroin.

No one can ever say for sure why Kurt ended his life. Some say he was murdered, others say it was the heroin that killed him, others say it was the fame, others say it was depression, others say it was his art. That is a lot going on there, maybe it was everything put together. He is someone who created something incredible out of nothing and for that, he will always be a person everyone will be interested in. He is no longer with us, he is beyond, to a place no one knows. At the time of his death, I remember hearing on the radio that he had taken his life. I remember feeling numb and confused. How could such an great band leader do that? I look back now and I see that it seems to happen a lot with famous people, sadly.

It's hard to believe that the life span of Nirvana was only seven little years. In that time, they made three albums, with Nevermind as their second and with "Teen Spirit" as the song that escalated them right to the top of the charts. The band's quiet versus with slower sounds leading up to unleashing choruses was their staple and resonated with us at that time. Kurt's voice was magnetic and his lyrics were real, he created magic by writing those words and combining them with sounds, to create some of the best music we will ever hear. I don't think he ever wanted to be the voice of a generation, unfortunately, that's exactly what he became, the voice of my generation...X. 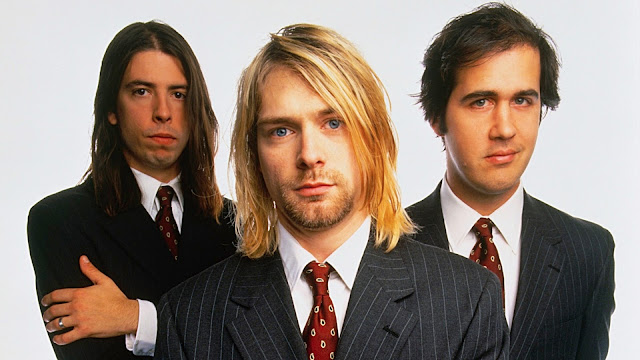