AS SHE POURED THE BOILING WATER INTO THE CUP, she made sure it hit directly into the middle of the tea bag. She thought maybe this meant it would make a stronger cup of tea or better tasting. It was going to be a busy day today and deep down she felt something else, something urgent, but figured it was her desire to stay on schedule. She turned on the news to check the forecast, as well as any other breaking stories she should know about, the weather being her priority.

Lenora
I want to get all my chores done before I leave, maybe I can even squeeze in a yoga class, I'll have to check online. My poor plants, they need water, this one is a little dry. Spring will be nice when the flowers start to bloom. Speaking of, I'd better plant these seeds now, so I can watch them grow. It's a been a long week, since I froze the world. That was scary, I'm not using those "powers" anymore, if that's what they're even called. Maybe there's something wrong with me, what if the whole thing never even happened? Whatever it was I'm finished with it, I have enough to deal with.

She packed up Susan's present and was excited for the normalcy of a birthday dinner. She hoped Susan would like the gift. She remembered Susan likes to drink, quite a bit and could possibly lose the package. She would have to keep a watchful eye on it for her. She kept her mystery at bay, she would tell no one, she didn't even want to think of it slipping out at dinner. She liked her plan, it was either that or fully embrace it. She dismissed the latter, as that meant more unsettling moments.

Susan
Where are my damn smokes? I always put them in this bag and they're not here. Maybe I smoked them all last night. I don't think I did, I could have, but I don't think so. There has to be at least one somewhere. Oh there you are, you little critter. Perfect timing too, the coffee is ready...breakfast of champions. It's so smokey in here, let me crank open this window and let some out. The fresh air feels good, I'll just perch myself right up here, smoke and drink my coffee. I'm excited for tonight, I know Lenora is coming and I'm not sure who else. We'll see as the night progresses.

Lenora arrived to the restaurant early, she was really hungry and was hoping to grab a quick appetizer first. To her surprise, Susan was already there, waiting to greet everyone.

"Hey how are you? Thanks for coming!"
"Hi happy birthday, is your actual birthday today?"
"Yes it is, happy birthday to me!"
"Yes, happy birthday to you."
"What do you want to drink? They have really good cocktails here."
"Oh, I think I'd like a glass of water, I'm not ready to drink yet, I have to eat something first."
"No problem, I'll order some food to much on."
"Sure, let me take a look at the cocktail menu. This one looks interesting."
"I've had that one, it's good, I've had all of them here actually and they're all good."
"I"m sure."

As the other guests began to arrive, everyone began to mingle and enjoy each other's company. Lenora forgot about her powers, as she enjoyed spending time with her friends. While everyone casually conversed, she couldn't help and look around, as she thought she smelled smoke. No one else seemed to smell anything though. She excused herself and decided to check on her coat.

Lenora
Whatever that smell is, it's getting stronger and people are starting to notice. It has to be someone smoking a cigarette inside. Since the ban, no one is used to the smell anymore, that has to be it. I never got my water after all, let me go grab that. Wait, oh no, that coat, it's on fire! There is no way the people at the other end of the room can see this, it's too packed in here.

As the coat went up in flames, the crowd began to panic. The booth was next and up in flames it went. Susan ran over and realized it was her coat that was at the center of it. She remembered she had carelessly thrown it on the table. She couldn't believe her birthday was ruined and started screaming and ran for the door. Others tried throwing water at it and on it went. As the fire took over, everyone else started screaming and running. In all the panic, people trampled on each other and fell to the ground. The flames were getting bigger and closer to those on the floor, when Lenora ran over to help. It was too late though, the flames caught on to her friend's dress and she was screaming in agony. Without thinking, Lenora quickly froze the scene.

Lenora
This is not a good situation. My friend is burning, the place is burning and I have no idea how to put these flames out. Ok stay calm, I should move her to the front door for starters, where she can get help and won't burn to death. I'll move this other guy, who is about to get burned, away from the stampede. I don't know what else, I don't have a hose or a bucket of water and this world may unfreeze at any moment and I'll burn too. The fire extinguisher! Where is it? There it is, I'll leave it next to the table. Ok, all that should help...a little.

After Lenora raised her hand and pushed it forth with a steady concentration, the flames came roaring back at her and the smoke began to make her choke. She covered her mouth and picked up the fire extinguisher, it was locked! As she tried to unlock it, a fireman came in and pushed her out of the way screaming, "Back up ma'am!" She grabbed the arm of her other friend, who was also trying to help, and together, with their hands covering their mouths and coughing, they quickly escaped through the front door.

Outside, everyone was there and embraced the women, as they came out. While they clasped on to each other, a steady rain began to fall. As Lenora looked over her best friend's shoulder, she couldn't help and laugh just little, at the incorrect forecast from the morning. As the rain fell down onto her face, she looked up and saw the moon; it seemed to look right back at her, as it shined through the only break in the clouds. In that moment, she knew that it was time, time to learn and master her so called . . . powers. 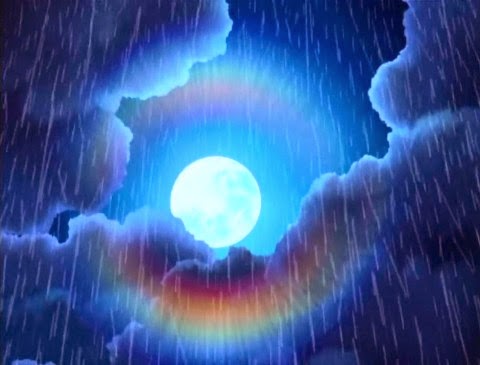 Interested in following Lenora from the beginning? Head to these posts: