I was invited to a birthday party and the event was taking place on a Saturday from 4 to 8 p.m., at a restaurant I am familiar with, Ken & Cook. I didn't know exactly how the event would happen, I know the space and the layout, and thought maybe it would be a big sit down dinner. (I'm too busy to bother people for this info, I would be fine however it would turn out). I did know there was a dungeon lounge, but I wasn't sure if it was still being used (as you never know with these things, all of sudden you look and the space is being used as storage).

I do know my friend and her boyfriend however and I know they love music...they also love food, so I wasn't sure, being surprised would be part of the fun. At around 2 p.m. that day, there came the massive snow storm again. I thought the party's attendance numbers may suffer because of it. A small part of me wondered if I should really go - it was almost a blizzard, no one would deny that. I love my friend to death however, so if she wasn't cancelling, I was going - because that's what good friends do.

It was not the easiest thing to get to, with a mix of all of the worst winter weather you could possibly imagine...snow, rain, sleet, freezing rain (it's different from sleet or plain rain) and really cold; although the news reports said to just "be careful out there." Once you surrender to your plans, somehow it all doesn't seem like that big of a deal, you just do it; albeit very slowly. Another one of my best buds was game too, she had the same mind-set about the party, put her heels on and came out!

We made our way to the Lower East Side. It was a slushy mess of giant puddles of frozen ice, fresh snow, wet, wet, wet everything. At this point I believed it was a sit-down dinner, because it was 4 pm in the afternoon after all, which I was more than happy with. The whole area was on the quieter side, and in the distance you could hear a faint thumping sound, I thought it was a passing garbage truck or something. When we arrived there was already a group out front smoking cigarettes, we figured they were part of the party.

Once inside, it was the regular nice ambiance, it was quiet though and we didn't see a large table anywhere. The hostess directed us to go downstairs. So it was a party in the basement after all...interesting. As we made our way down, each stair represented two hours into the future until we reached the bottom . . .and it was 2 a.m. Coat check was in full effect, as well as the fashionably buzzed crowd waiting to enter the bathrooms, three at a time. My friend and I are a "little" familiar with this vibe, so it was easy to go with the flow.

The doors opened and there it was...very dark, strobe-lights rotating, DJ's spinning (hired by the host), bartenders mixing and people dancing with hands in the air (cut right to the chase). We naturally made our way to the bar. Little by little the place became packed and all 80 to 100 people danced the afternoon away. Full on, underground club-vibe at 4 pm, on a cold, wet Saturday afternoon. . . now that was a fun birthday party* 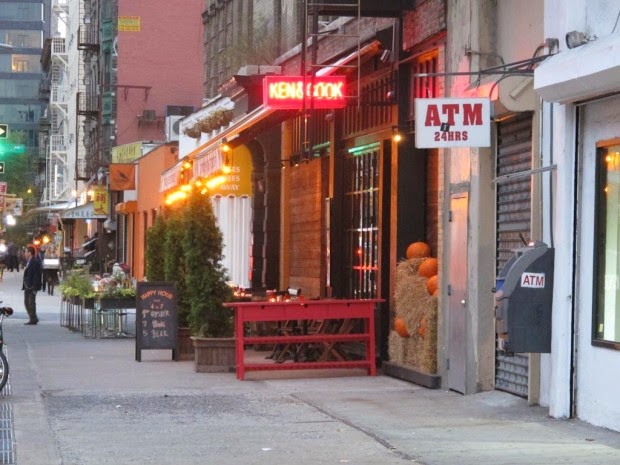 I don't ask for much.

p.s. for anyone who knows this space as the former, illegal operation Lil' Charlie's, that was shut down and it's now used as a private event space - where legally they can do whatever they want.