Project Runway is still on! In case you thought it's been cancelled. I know I did and then it popped up on one of my favorite channels, Lifetime. Hi, I'm Fabi and I'm a #Lifetime addict. Hi. Fabi. I started watching this season of Project Runway and the last episode, the avant garde challenge was a good one, as I knew it would be. Avant garde are garments that make more of an art statement. They aren't something someone would actually wear somewhere - well, maybe to a Halloween party.

Sandyha's idea was inspired by the test screens on t.v. that used to come on late at night when programming was over. Korina was inspired by some large bird with wings and the sketch looked absolutely amazing. Fade was completely uninspired, maybe it was the rain runway - oh yeah the models were walking on a runway that was raining. He kept saying he would figure it out and turn out something fabulous, ok.

Alexander had an idea to make a dress come to life on the runway. The plan was to use an all white fabric and add food coloring to the seems and when the rain hit, the color would fall all over the dress as the model walked. Sounded great, but could also be a gigantic flop logistically. Kini thought of umbrellas naturally and designed and upside down umbrella dress. Emily said she wanted to create some sort of catsuit. The idea sounded pretty cheesy, I was scared for her. 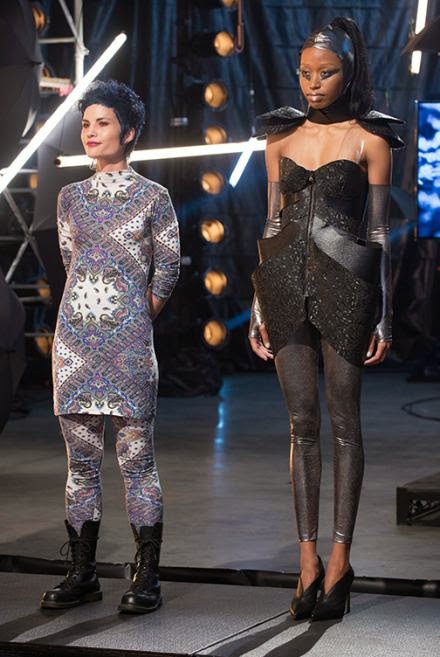 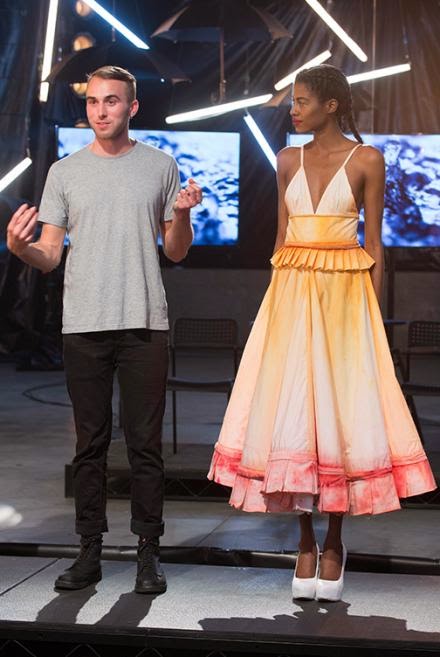 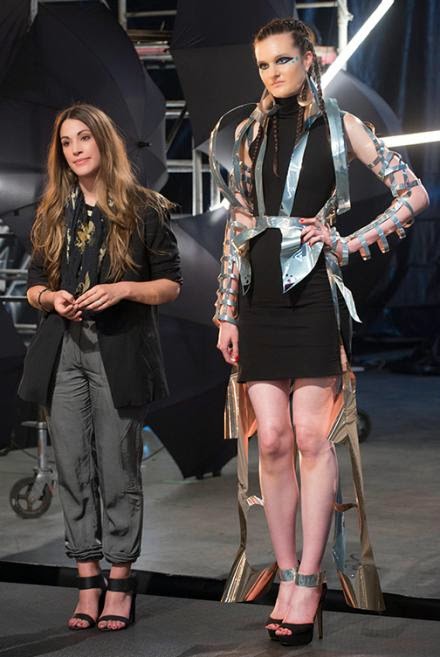 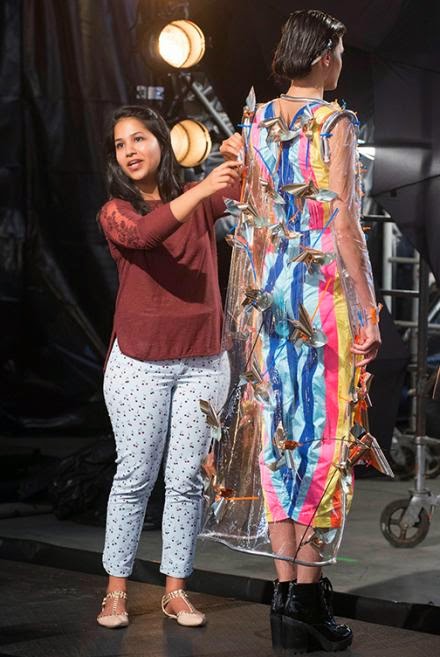 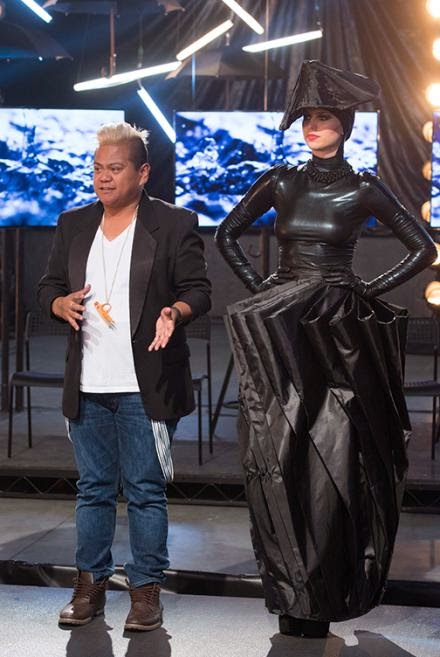 If you didn't watch the show, who would you pick as the winner?

Here are the designs again and with my two cent commentary this time. For fun, if you don't know who the winner was, pick your winner from above before reading my comments, I don't want them to persuade you...

Emily created a superhero costume alright, but that wasn't the challenge. That is one ugly outfit. It looks like a bug superhero, like what those horrible little insects (I can't even say their name as I have a phobia to them) would wear if they were animated. While we're at, wtf is Emily wearing? It looks like my jams.

Alexander turned it out, the dress did exactly as it was supposed to. The color appeared on the white fabric before the show started, so I was a little worried for him. When the rain hit though, the dress came alive as he envisioned it. The actual dress isn't ugly either, except for that strange kitchen, curtain flap thing at the waist.

This looks nothing at all like the sketch Korina drew. The sketch had these great large wings with fabric that rose above her head and away from her body. I don't see the wings anywhere here. The plain black dress is adding insult to injury. Flop.

Zac Posen had the best critique of this. He said, "If you're going to put a large play button somewhere, it better do something." So funny. Fabulous Zac, just fabulous dahling.

The fans Sandhya added were supposed to turn when the rain hit it, they didn't. It looks like something they would wear on Yo Gabba Gabba.

This looks pretty cool. Kini made an upside umbrella dress just as he said he would.

So, who did you pick for your winner?
I know I had mine before they announced.

Thanks for the twist judges. That was a tough one. I had chosen Alexander as my winner; even though I really loved Kini's design, so that was fun to find they chose both! Good times, thanks Project Runway.