I thought the women tried a little harder than usual to create drama this season. I'll watch a reality show until it's obvious it's scripted, once it's obvious, it's too cringe-worthy to sit through a wooden performance.

Luann nailed it on the head, when she said at the reunion that Sonja has changed. Why does Sonja keep her husband's last name anyway? There can't be any worse reminder of an ex-husband, than signing his name every day. She talks a lot about how rich she used to be and drops a lot of names too. It's loud and clear, she was once rich, we got it. She was a much bigger camera-ham this season. To her credit, it does make for better television and she would be great to have at a party, but I bet it's challenging being her real life friend.

She did stick up for Aviva on many occasions, which was really nice of her. It was mean how the other women made fun of Aviva for her illnesses. The poor woman and what happened to her leg as a child, oh my goodness. I do believe she was sick, to go see a doctor just to get out of having to go on a girl's trip seems a little far-fetched. Then again, I would probably fly across the country to see an asthma specialist, to get out of spending a weekend locked up with some of the women.

Kristen calling Heather "bossy" was a bad choice of words - Heather is the boss of her company. Kristen later said there was nothing wrong with being called "bossy," this is true; however, when it's used negatively in an argument, it's a different story. Kristen said her tagline, "I may not be the sharpest knife in the drawer, but I'm pretty," is an inside joke between her and her husband. Why air it on national television then without telling us this? She is pretty, for sure no doubt.

Ramona was her usual un-filtered self. She says mean and hurtful things a lot, but she also has some funny lines. She called out the countess for using auto tune. It was funny because using auto tune to sing is hilarious, you can't take a singer seriously when they use it. Turns out, Luann really is classy though, the way she laughs off the insults Ramona sends her way is impressive. She doesn't let the words of a mean spirited person bother her too much.

Carol's book, The Widow's Guide To Sex and Dating, seemed like odd subject matter for her. Luann took her on a date with a good looking man and we watched first hand how it was supposed to be done. She bombed it though. She didn't play it cool at all and acted more like a giddy teenager than a dating expert. Hopefully she's better at the sex. Maybe she did use a ghost writer after all. I don't really care much about her ass, she has great hair though.

So, who will make it on to the next season? I'm going to predict Aviva, Sonja, Ramona and Luann come back and Heather and Kristen get the boot. While it wasn't the greatest season, I'll probably tune in again, unless a better show airs at their time slot. 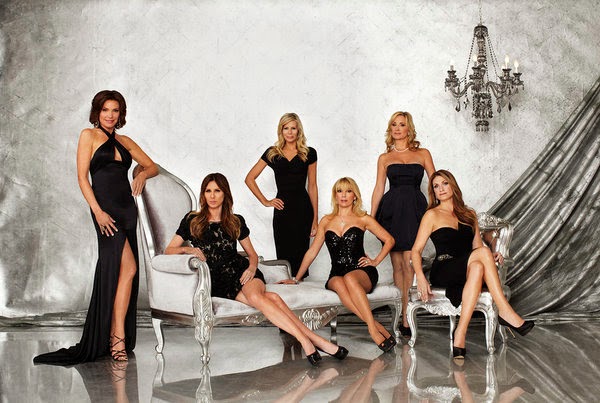