Thank you Gawker for introducing me to Tanishq Abraham...

For those who haven't heard, he's a 10 year old, American genius who graduated high school a few days ago and earned an Associates degree, all while maintaining a 4.0 gpa. Tiger moms have some serious competition. As a four month old baby he was answering questions in children's books. While most five year olds are learning how to read and write, Tani (I just totally made up this nickname) was finishing up math courses at Standford University's Education Program for Gifted Youth for grades K-4. This is all really just to much to believe, but alas, it's true.

As a wee lad of just 6 years, he decided to enroll in college level chemistry and biology. Don't forget he's getting A's in these classes you guys. I'm not playing make-believe, this kid is real. Fast forward to eight years old, where Tani finishes an intense course in biotechnology, guess what grade he gets. Google him if you don't believe me. He even took a course at Berkeley (online), BERKELEY. Naturally, at ten years old, he becomes the Vice Present of Phi Theta Kappa, an international honor society. 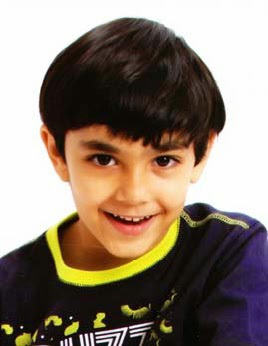 There it is, his whole academic life, he's ten now. As I'm sure you're wondering, his pop is a software engineer and his mom is a doctor. What a cutie this kid is and yeah he's gifted in the arts too - duh. On graduating high school this past weekend with honors, Gawker reports he told KXTV, "It wasn't, like, easy, but it was not that hard either." Okay. Here's how his brain works according to Tanishq: "when you give me something, information about that topic comes into my mind. I don't know what it is but that's how it is for me."

The truth is, he didn't really finish high school two days ago, he finished this past March. He was too busy with his college courses though to attend the ceremony. I'm mean really, who has time for these things these days anyway?


He had me at four month old baby.

Watch Tanishq at one of his college courses being the only one to answer the professor's questions: Tanishq In Class