I'm a mom with a small child in school. I admit that I live in fear sending him there. It's not a paralyzing fear I can't live with, it's one I'm used to and have no choice but to accept. Everyday when he's off I make sure and give him a big kiss and a hug and tell him, "Have a great day at school honey." I can't help and think in the back of my mind, "Please let everything go ok and that no shooter goes there." It sickens me that I have to have this fear of my baby going to school.

This is reality I (along with all other parents) live with every morning. Of course I try and ignore it and not let it bother me, but it's there. Last week my son's school went on lockdown. Apparently, there was a man with a gun running loose, we didn't receive much more info other than that. We did learn he was an escaped convict and not a teenager with an assault rifle. This is terrifying stuff here guys. On the other hand, kudos to the school for acting fast with the lockdown and keeping the kids safe of course.

The shooting at the high school in Oregon yesterday, marks the 74th shooting at a school since Sandy Hook. The attack was with a semi-automatic assault weapon, by a 14 year old freshman, who was a student at the school. The attack happened at 8 in the morning, he was wearing all black, a vest and a helmet. He shot and killed a student, injured a teacher and was cornered in the bathroom where he was found dead, probably self inflicted. Here is a chart that shows all the shootings at schools since Sandy Hook: 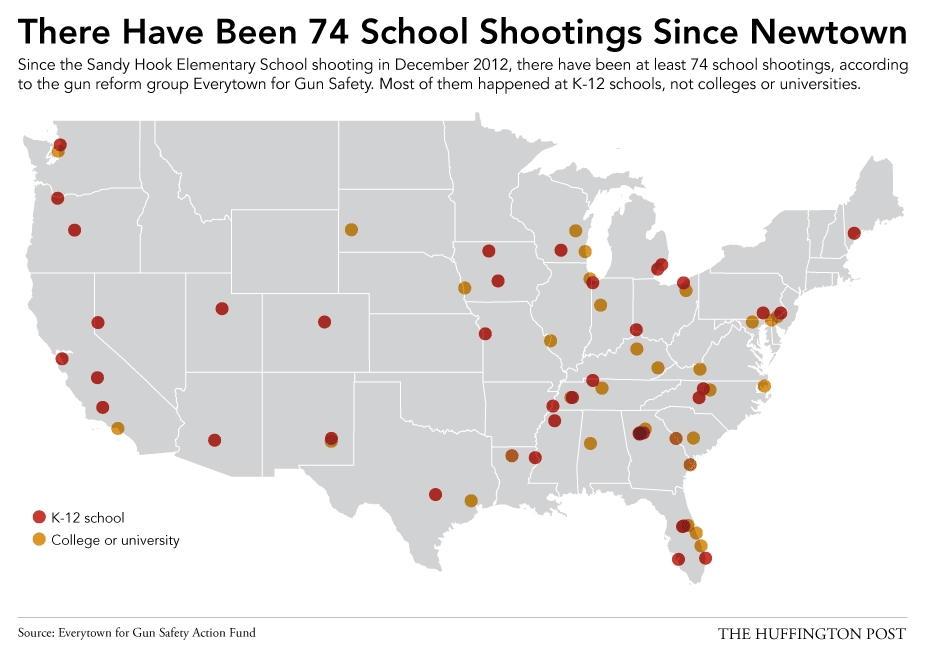 Quick stats on the above map: 3 in 4 shooters obtained guns at home and most of the shootings above happened in schools K-12, not in colleges or universities.


We're the only developing country in the world where this happens and it's happening an average of once a week now. It turns out responsible gun owners -- who are part of the NRA no less -- are in favor of better gun-control measures. Out of the NRA's 4 million members, three out of four want buyers to complete background checks before they purchase. Former New York Mayor, Michael Bloomberg, told Rolling Stone magazine: "Their members are much more rational than the management of the NRA, they're out of touch."

According the Rolling Stone article, the NRA puts out communications saying it's not a "trade organization" and that it has no ties with the makers of guns or those who sell them. This is false as the NRA big wigs include 22 firearms manufactures, 12 of whom make assault weapons. Additionally, the NRA receives "gifts" (money) from donors (gun companies) who make assault weapons. The money helps fund the NRA in their efforts to lobby against gun-control, so far up to $52 million in recent years. Even worse, they get money from the sales in what's called a "Round-Up" program. Stores urge customers to "round up" their purchases to the nearest dollar and they send the extra money to the NRA, so far almost $8 million from Midway customers alone.

It's a big money game and the NRA are winning. The ones suffering are innocent children, parents and families. Do Americans really need to be allowed to purchase semi-automatic weapons? What do they need them for? I guess it's fun for some people to go to the country and shoot wild animals as a sport. That doesn't sound fun at all. The NRA pushes legislation that the constitution protects Americans "right to bear arms."

Women weren't allowed to vote at one time, according to the constitution, only men. The constitution was changed for the better, progress, growth and it can be changed in this case too for those same reasons and include in there, safety for our children. To keep on top of this important movement and understand how the NRA leaders (not members) are blocking gun-control, check out this site: Stop The NRA. Our children need a safe, fearless school environment, will we ever see this again?

If you're going to read any in-depth article on gun-control and the NRA, this is a good one: NRA vs. America by Rolling Stone, they expose a lot.